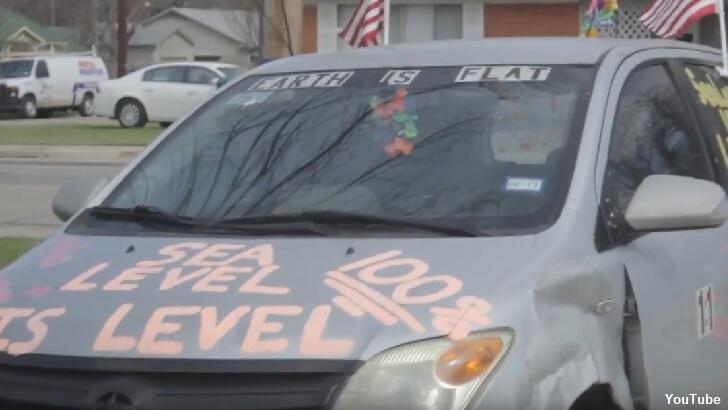 An outspoken Flat Earth enthusiast in Texas is reportedly in hot water with the law after allegedly scrawling messages declaring the coronavirus to be a hoax on the pavement of a Walmart parking lot. Patrick Burke has become something of a local celebrity in the Dallas area over the last few years thanks to his fervent advocacy for the Flat Earth theory, which he promotes by way of numerous statements emblazoned on his car and home. And now, it would seem, the man known by many in the area as 'the Flat Earth guy' has set his sights on what he believes to be another nefarious conspiracy.

According to police, a resident in the city of Denton reported a man writing 'COVID hoax' on the asphalt outside of a Walmart and "being disrespectful to guests and employees." The manager of the store subsequently told investigators that an individual had tagged their parking lot with the phrase on multiple occasions. Identifying the suspect proved to be pretty easy as the perpetrator was reportedly spotted driving a car with messages about the Flat Earth all over it.

Just to be sure, police ran the license plate of the car after it was captured on video by security cameras and determined that, indeed, Flat Earther Patrick Burke was the man behind the coronavirus-related messages. When cops went to his residence, he reportedly asserted that his First Amendment rights allowed him to write the statements on the Walmart parking lot despite it being private property. It would appear that police disagreed with Burke's defense and subsequently issued him a citation for criminal trespassing.