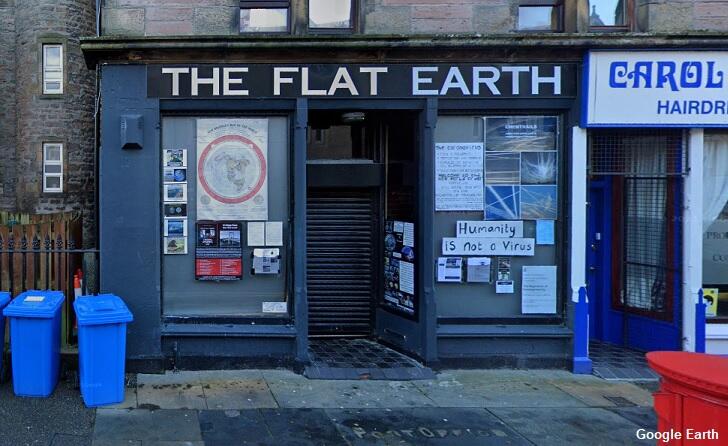 Flat Earth enthusiasts in Scotland have come up with a rather clever new method of spreading the word about the infamous conspiracy theory.

Advocates for the idea have actually rented a store along a commercial street in the city of Inverness to create a proverbial pop-up shop exhorting passersby to question the shape of the planet.

Sporting a sign above the store saying simply 'The Flat Earth,' the locations largely serves more as an advertisement than an actual business as the doors are locked and the shutters are closed.

However, on the window of the store is a list of 50 questions which the renters believe prove that the Earth is flat.

The unorthodox idea seems to have worked in the sense that it has created something of a buzz in the city with people talking about the Flat Earth theory or, at least, the odd 'store' devoted to it.

And, in a testament to the power of capitalism, one official in the city observed that to STV that this particular street has had a few shops close in recent times and, thus, "anything that helps boost the occupancy is to be welcomed."

Considering that Scotland has seen a rash of Flat Earth-related graffiti over the last year, the pivot to a more professional approach in spreading the message is, indeed, a step in the right direction.

That said, one can't help but wonder how neighboring business Carol Ann's Hairdressing feels about all the attention to the area and, perhaps more importantly, whether or not the Earth is flat.