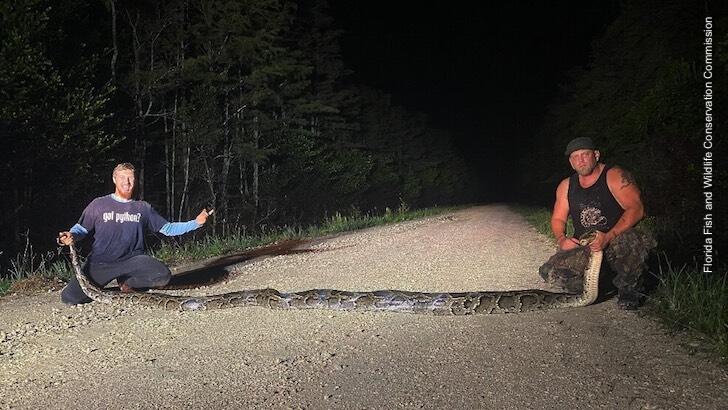 Two hunters have caught a massive Burmese python in the Florida Everglades. At 18 feet, 8.8 inches, the monster nabbed by Ryan Ausburn and Kevin Pavlidis surpassed the previous record by 1.2 inches. and weighed in at 103 pounds.

Since March of 2017, the South Florida Water Management District has offered a bounty (and even an hourly pay rate for approved hunters) on the invasive species, which have decimated native populations of raccoons, opossums and bobcats and almost eliminated some rabbit and fox species.

As of a year ago, participants in the ‘Python Elimination Program’ had killed over 2500 of the animals, with a $50 bonus offered for any specimen over 4 feet, and $25 per foot over that length. There is also a $200 bonus for any python guarding a nest of eggs.

The pythons were most likely introduced into the Florida ecosystem in the late 20th century as escaped or released exotic pets. They have no natural predators.