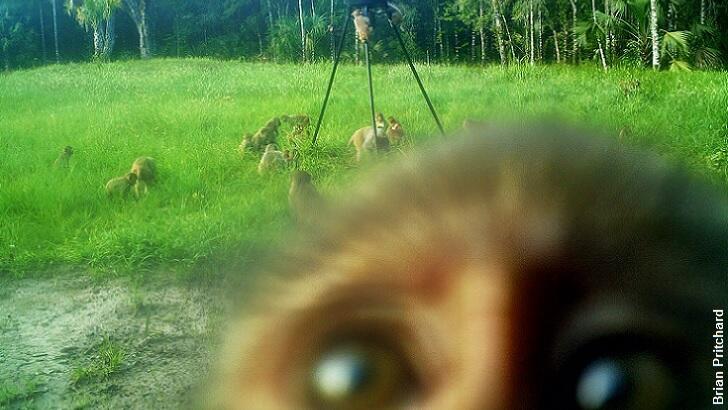 The monkey invasion of Ocala, Florida foretold last week appears to be coming to fruition and it's pretty terrifying.

After video emerged of a family accosted by wild rhesus monkeys while visiting the Silver Springs State Park, wildlife experts warned that their growing population could become problematic if it spread to residential areas.

Their concerns were confirmed when an Ocala man revealed that his backyard, which sits a mere four miles from the park, has become overrun with the creatures.

Brian Pritchard says that he installed a deer feeder in his backyard along with a game camera in the hopes of taking some photos of the majestic animals.

However, he was unnerved to discover that, rather than luring deer to his yard, the corn-dispensing device had drawn the attention of dozens of wild monkeys.

In just a handful of days, the clever creatures have feasted on an astounding 250 pounds of food from the deer feeder by way of an organized effort where one of the monkeys climbs atop the stand and sprays the corn out at its fellow hungry simians.

Despite the twice-daily influx of the monkeys, which Pritchard says sometimes reaches up to 50 of the unsettling animals at a time, he hopes to maintain a peaceful relationship with the creatures as long as they do not bother his children.

Based on their brazen antics so far, one would be wise to worry that Pritchard's property may merely be the first stage in what could be an ugly battle for Ocala between humans and the marauding monkeys.

And may God help us all if the simians start to speak for we could truly be at the dawn of the planet of the apes.