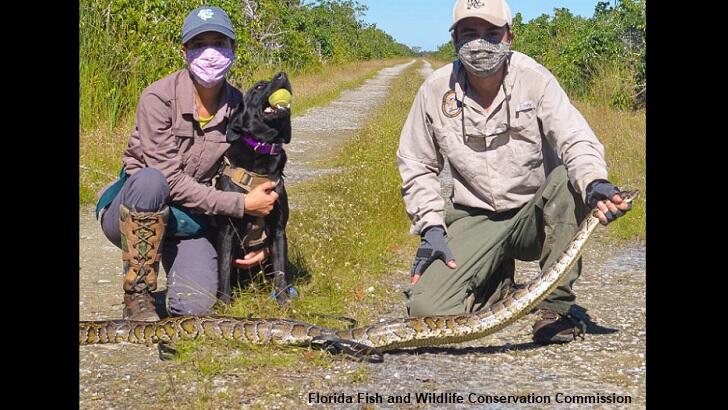 Wildlife officials in Florida have devised a rather ingenious new method for tackling the state's problematic python population: dogs that are specially trained to hunt down the invasive snakes. An ongoing issue in the Sunshine State for decades, the monstrous reptiles are believed to be responsible for the stunning decimation of the small animal population in the region. Over the years, authorities have tried all manner of ideas to reduce the number of pythons in the state, including offering hefty bounties for industrious individuals brave enough to go after the snakes themselves. And now a less costly and far more adorable alternative has emerged in the form of a detector dog team.

According to the Florida Fish and Wildlife Conservation Commission, the pair of pooches, named Truman and Eleanor, were trained over the course of a month using "python-scented towels and live pythons with surgically implanted trackers" to detect the snakes in the wild. Additionally, the dogs were taught how to alert their handlers when one of the creatures is present and, remarkably, to ignore other animals in the area while on the hunt for the ravenous reptiles in their midst. Launched earlier this month, the concept has already proven successful as the dogs managed to locate an eight-foot-long python lurking in Miami-Dade County that was subsequently removed by wildlife officials.