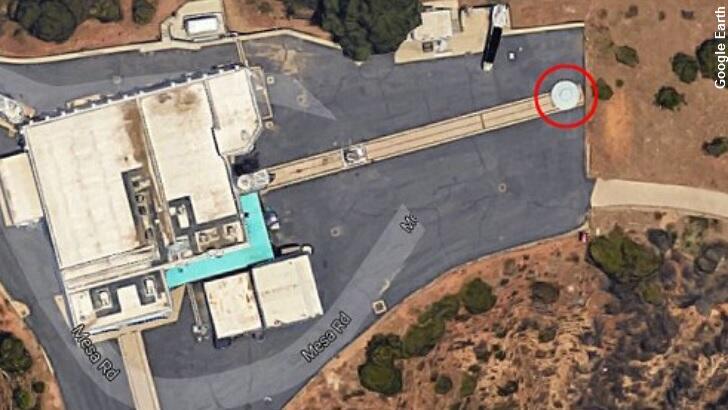 In a departure from scouring traditional sites like Area 51 and sources such as Mars rover images, an industrious anomaly hunter believes he has discovered a UFO at NASA's Jet Propulsion Lab hiding in plain sight in an image from Google Earth.

Located in Los Angeles, the renowned division of the space agency known as JPL is credited with launching America's first satellite into orbit back in 1958.

The organization also has deep esoteric roots as one of the group's founders, Jack Parsons, was both a brilliant rocket scientist as well as an avid and active occult practitioner.

Coupled with his association with iconic figures such as Aleister Crowley and L. Ron Hubbard, Parson's role in the creation of JPL has led to the group figuring prominently into a number of esoteric conspiracies.

Given its function as NASA's robotic spacecraft division aimed at exploring deep space, JPL is often suspected of having a hand in a UFO cover up as well.

Such is the case with this latest find by a UFO enthusiast who examined the JPL headquarters using Google Earth.

While looking for anything strange at the facility, he was stunned to see something that bore an uncanny resemblance to a classic 'flying saucer' sitting at the end of a runway.

A look at other satellite images of the site from different times appears to show the object having been moved off the runway to a different area nearby in later years.

As one might expect, the circular anomaly has drawn interest from some members of the UFO research community who say that the find is evidence that JPL is working with recovered alien craft or some other ET technology.

However, this view is not shared by all who seek answers to the UFO enigma as skeptical researchers argue that it is highly unlikely that JPL would commit a gaffe like leaving their flying saucer outside to be photographed by Google.

In this instance, it appears, common ground can be found between incredulous UFO enthusiasts and ardent skeptics who say that the enigma does not exists.

And that, perhaps, may be even more amazing than a flying saucer at JPL.