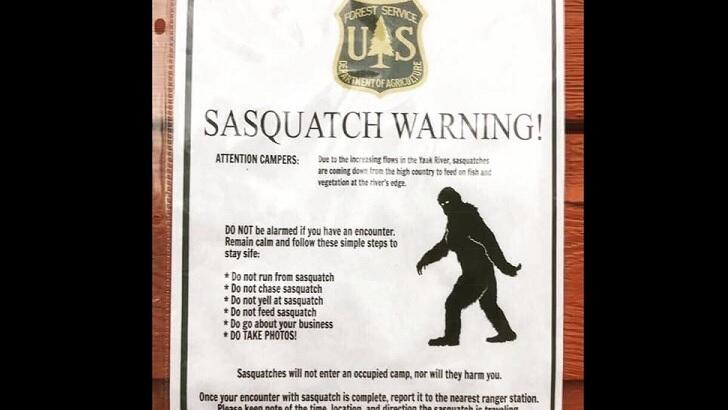 The U.S. Forest Service was forced to issue a statement on Monday assuring the public that Bigfoot is not running amok in Montana. The bizarre announcement came about after images of a cleverly-crafted 'Sasquatch Warning,' designed to look like they were produced by the agency, began circulating online in recent days. The notices claimed that, "due to the increasing flows in the Yaak River, Sasquatches are coming down from the high country to feed on fish and vegetation at the river's edge."

The faux flyers went on to warn visitors to the Kootenai National Forest in Montana that they were at risk of possibly encountering Sasquatch. Should such an event occur, the 'agency' advised that witnesses neither yell at nor feed the creature and, confusingly, that they should not chase the Sasquatch nor run away, leaving one to wonder what, exactly, they should do. Thanks to the prominent placement of the U.S. Forest Service logo on the flyers, it would appear that they managed to fool a lot of people into believing that they were genuine.

And so, faced with the prospect of Sasquatch hunters flocking to the forest while prospective tourists changed their vacation plans to avoid the animal, the U.S. Forest Service took to social media on Monday to provide some clarity on the situation. By way of a somewhat terse statement that suggests they did not find any humor in the fake flyers, the agency announced that "the Sasquatch poster that is circulating around Facebook and other areas was not created by or coming from the U.S. Forest Service or the Kootenai National Forest."