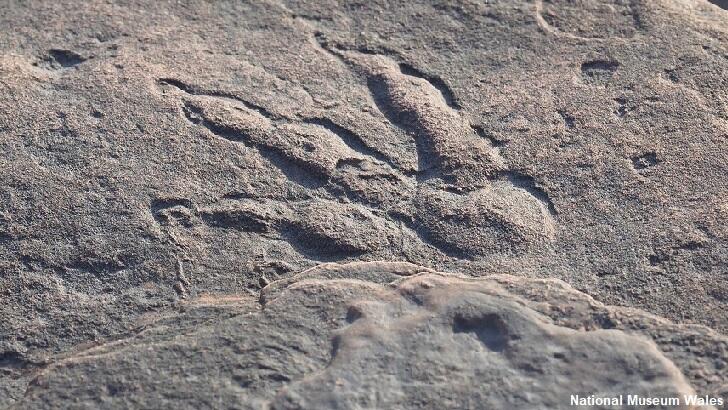 A four-year-old Welsh girl who was walking along a beach with her father wound up making a rather incredible discovery when she spotted a remarkably well-preserved dinosaur print that is believed to be a whopping 220-million-years old. According to a press release from the National Museum Wales, the remarkable find was made last month when Lily Wilder and her dad, Richard, were visiting Bendricks Bay, which boasts something of a reputation as a hot spot for dinosaur prints.

In the midst of their stroll, the youngster directed her father's attention to a curious impression in a piece of rock. According to the girl's mother, Richard initially "thought it was too good to be true," but took a picture of the intriguing imprint nonetheless. When he showed his wife the photo later that evening, she was astounded and set about trying to find an expert who could possibly determine whether or not the impression could have come from a dinosaur.

When scientists from the National Museum Wales saw the image, they were equally amazed, not only confirming that the youngster had discovered a dinosaur print, but also marveling at its tremendous condition. One paleontologist declared that it is "one of the best-preserved examples from anywhere in the UK," while another expert called it a "spectacular find." The creature that created the print, scientists say, was likely a primarily bipedal dinosaur that roamed the Earth around 220 million years ago. The newly-discovered was subsequently safely removed from the rock and transported to the museum where it will be studied and displayed in their collection.