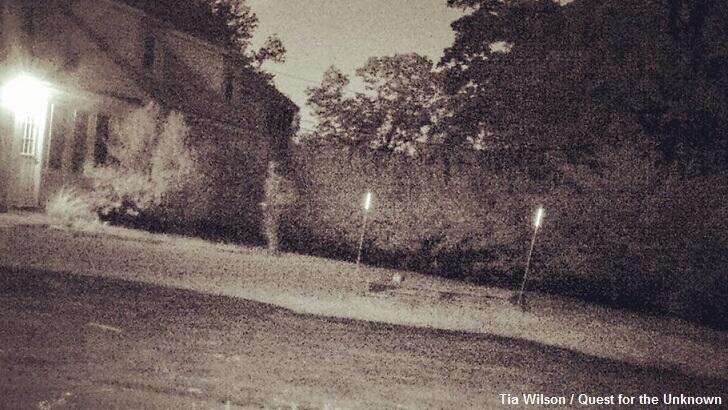 A game camera located in the yard of a Maine woman's farmhouse captured an intriguing image that may show the ghost of a soldier. According to a local media report, Tia Wilson wanted to catch a glimpse of a fox that had been feasting on her chickens and so she placed the camera in her yard prior to heading out for a weekend camping trip. Upon her return, she was astounded to see that, among the many photos of various wildlife which had triggered the motion-sensor camera, there was one image eerily out of place.

In the photo, taken at around 9 PM in the evening on a Saturday night, there is an anomaly in her yard which bears an uncanny resemblance to a person wearing a backpack. Although she first became unnerved by the possibility that the photo showed a prowler or some other kind of nefarious individual outside of her home, Wilson soon realized that the photo was a whole lot weirder. That's because the camera didn't take any other pictures of a person in her yard before or after that image, which would be impossible based on where the camera was placed and the position of the anomaly in the photo.

No doubt Wilson felt particularly lucky to have had her camera capture the image as she is an avid paranormal enthusiast and shared the image on her Facebook page devoted to the strange and unusual. She also subsequently dug into the details surrounding the history of her property and may have actually discovered the identity of the potential apparition. Wilson learned from a neighbor that the home once belonged to a soldier who had his heart broken after returning from World War II.

Skeptics will, of course, say that the 'soldier' is simply a trick of light and shadow likely conjured by a bug or some other prosaic source causing the camera to spring into action. However, Wilson has her own compelling theory that the figure could be a residual haunting and is hoping to have the camera ready in one year's time to see if this hypothesis is correct. With that in mind, we'll keep our fingers crossed that this story had a sequel in 2019.