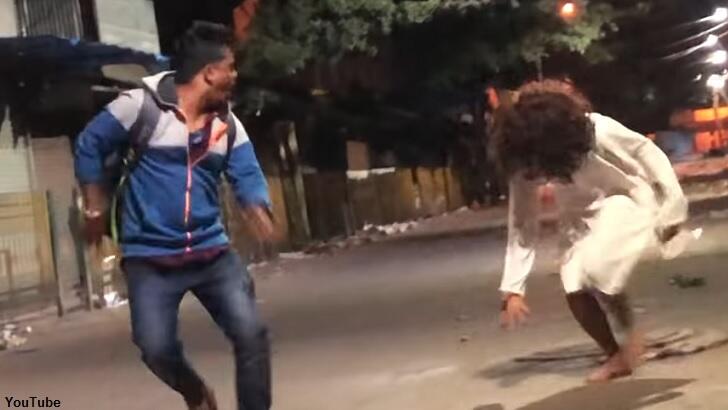 'Ghost' and Friends Arrested in India

A group of mischievous young men in India wound up on the wrong side of the law thanks to an ill-advised prank in which one of them dressed up as a ghost to frighten strangers. The weird incident reportedly unfolded in the city of Bengaluru in the wee hours of Monday morning. Numerous drivers and pedestrians passing through the community were taken aback when they were approached by what seemed to be a spirit lurking in the night, but was actually a college student clad in a white robes with his face obscured by his voluminous hair.

One target of the prank was particularly unsettled by his encounter with the 'apparition' and promptly reported it to the authorities. This unfortunate individual apparently initially believed that he had seen a genuine ghost, however his fears were soon squashed when more people began contacting the police about their own brushes with the 'paranormal.' Cops on patrol subsequently became 'ghost hunters' and eventually located the 'spirit' and his six friends who had helped him pull off the prank.

While authorities conceded that the actions of the young men were meant to be a joke, they argued that the pranksters took it too far. "What if someone meets with an accident or suffers a cardiac arrest, while trying to escape from them," mused one police official, "scaring people in a public area is not acceptable." As a result of their misadventure, the seven young men now face several charges including wrongful restraint and criminal intimidation.

As for why they performed the foolish prank in the first place, the reason is rather unsusprising considering the age in which we live: they are aspiring YouTube stars. In fact, due to the publicity surrounding their arrest, it would appear that their hijinks paid off as the video of their antics the other night has already gone viral in India. Whether it was worth all the legal trouble they now find themselves in likely depends on if they end up in jail and, in turn, for how long.