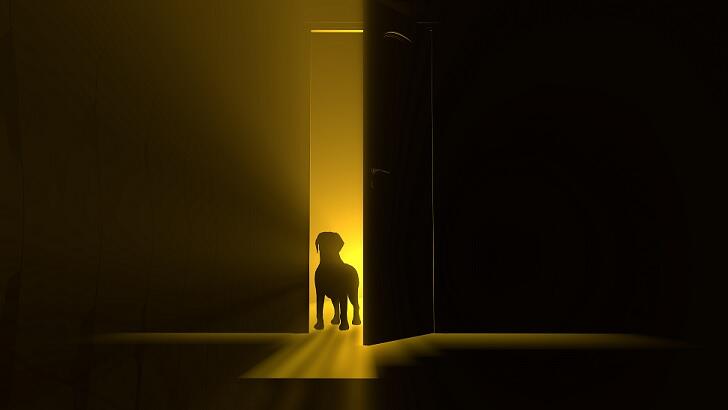 An Arizona woman suspects that an eerie image captured by her home security system shows the spirit of her late dog beside her. The spooky photo, which can be seen below, was reportedly posted to Reddit earlier this month by Angelita Casale, who marveled that her dog Rocky had "passed away Aug 31st and I think this is evidence that he's still by my side." According to her, the scene occurred as she and her husband were returning for dinner one evening and, at the time, did not notice anything unusual in the driveway. However, her husband checked out the latest footage from their security camera a few days later and noticed something unusual.

In the image, a puzzling form can be seen off to the side of Angelita and the weird anomaly appears to sport four legs. Upon looking at the picture, she did not immediately spot the oddity, but when her husband pointed it out to her, “I came to the realization that the shape resembled Rocky. I started crying happy tears at what I was seeing.” While many observers online indicated that they thought the curious form might have been Angelita's late dog and shared similar stories of their pet pooches returning in spirit form, more skeptical people suggested that the 'apparition' was merely the product of motion blur.

While that explanation may solve the mystery to some, it may not matter very much to Angelita, who mused that "I’m no expert and don’t know much about motion blur. To me it looks like my dog and I was excited to have my own 'proof.'" For anyone who has ever lost a beloved pet, her perspective is certainly understandable. What's your take on the peculiar picture? Is it Rocky stopped by Angelita's home one last time or merely a trick of light and shadow? Share your thoughts at the Coast to Coast AM Facebook page.