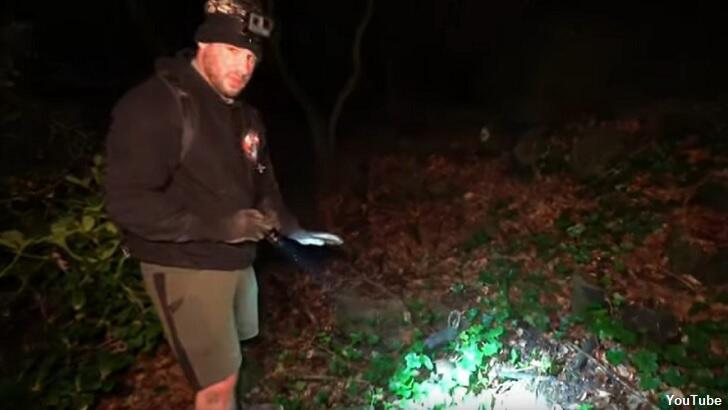 A pair of ghost hunters discovered a human skull while on an investigation in England and actually posted a YouTube video wherein they show the moment that they made the gruesome find. Paranormal researchers Danny and Felicity Duffy reportedly stumbled upon the remains early Monday morning while exploring the grounds of an abandoned hotel in the town of Bolton. An initial account of the incident indicated that the couple were aghast by what they had found and quickly phoned the police to inform them of the discovery.

On Tuesday, the pair uploaded a video to YouTube showing the unsettling experience from their perspective. After reflecting on being at the center of such a strange event, they cut to footage from the investigation which culminates with the pair spotting a camouflage jacket on the ground and then noticing a skull nearby. Danny appears to get physically sick from the discovery, but then regains his composure and makes what was probably an unwise decision. After donning a pair of gloves, he actually picks up the skull, examines it, and then displays it to the camera.

Confirming that it is indeed human remains, the duo briefly marvel at their macabre discovery, before it dawns on Felicity that their impromptu 'forensic analysis' is not the best idea as she declares "you shouldn't have moved it. Put it back, put it back. We have to ring the police, this is foul." In an admittedly amusing moment, the realization of what he has done washes over Danny and he carefully puts the skull back in the spot they found it in a manner akin to someone who has just broken artwork at a museum and is hoping no one will notice. Eventually, the pair call the police, who arrive on the scene to investigate the situation.

As one might imagine, the duo have received a bit of backlash for both posting the video, which some have seen as exploitative, and their spur-of-the-moment showcasing of the skull before calling the police, which is presumably the act of disturbing a crime scene. In response to the former criticism, Danny was unmoved, telling a YouTube commenter that "people die every day, that's the facts of life, get over yourself." When it comes to the latter issue, while police were likely displeased with what they had done, the pair probably won't get into any legal trouble over the matter as it would seem that the skull had been there for quite some time.