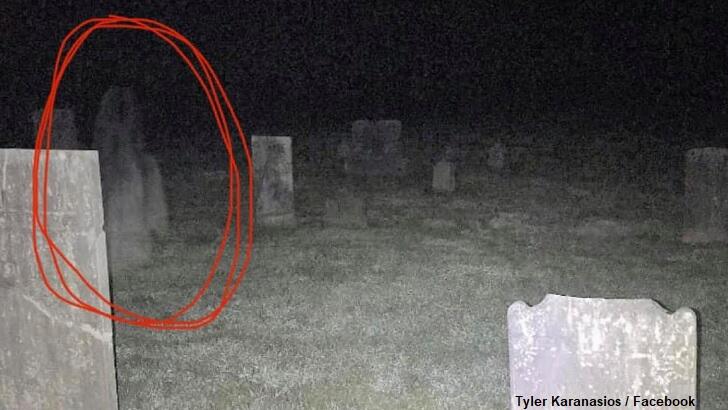 A New Hampshire man suspects that a photograph taken during a late-night visit to a cemetery just might show a ghost lingering near a gravestone. Tyler Karanasios reportedly took the picture during a visit to the Pine Hill Cemetery in the community of Hollis last summer and subsequently shared it on a local Facebook group a few weeks ago. Posting the image as well as some comparative shots from the site, he explained that he and a friend had visited the 250-year-old burial grounds and "decided to take some flash photos to keep for memory." When they later looked over the images, they were stunned to see "what appears to be some sort of shadowy ghostly figure."

Among the sizeable membership of the Facebook group, response to the spooky image was decidedly mixed as some users suspected that the anomaly in the image was some kind of spirit and more skeptical observers argued that the oddity was the result of prosaic elements such as the flash from the camera reflecting off of a tombstone or perhaps a shadow. For his part, Karanasios leans towards the ghostly explanation, musing that "I see a woman in a long cloak or dress of some sort." With that in mind, what do you see in the image? Share your thoughts with us at the Coast to Coast AM Facebook page.