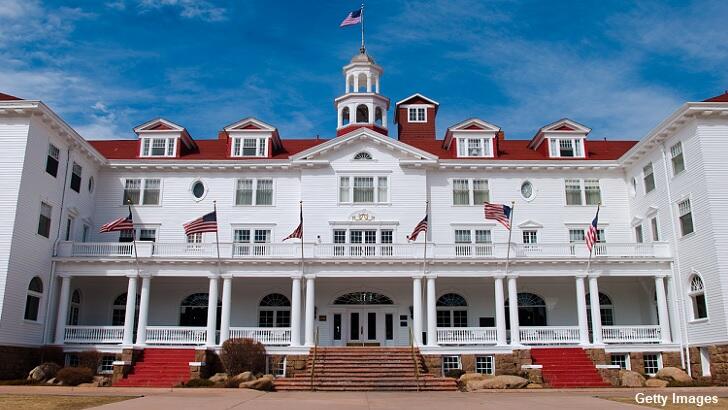 A tourist taking part in a ghost tour at Colorado's notoriously haunted Stanley Hotel believes that she may have snapped a photograph of a spirit lingering in a window. The eerie image (which can be seen below) was reportedly taken by Kim Kimberly of Texas when she visited the spooky location with some friends late last month. The hotel, which famously inspired the setting for Stephen King classic The Shining, is said to be the home of a variety of spirits and feature nightly tours for those hoping to catch a glimpse of a ghost. In this instance, the spirit realm may have smiled upon the visitor from Texas as one particular photo seemed to show a figure lurking in a window of the iconic hotel.

As is so often the case with ghost photos, Kimberly did not notice the anomaly until she later looked at her pictures from the tour and was astounded by what she saw. "There was no one in the windows when I took those photos," she insists, "my friends were taking photos as well and they didn't see it either." Noting that some people have suggested that the oddity is merely a trick of light and shadow created by curtains, Kimberly expressed skepticism at that explanation, arguing that they "are the exact same in every window, they are see-through." She went on to muse "if it was curtains, what is the dark area that looks like hair, and the skin tone color? That can't be a shadow."

Kimberly also dismissed the possibility that the perceived figure could have been a mannequin, positing that she would have noticed such a thing in the window when she took the picture. Beyond that, she indicated that the photograph was one of two pictures that she took in that moment and the potential apparition is only in one of the images. Lastly, responding to those who might suggest that she simply Photoshopped the spirit into the picture, Kimberly declared "I have no idea how that even works." With all that in mind, what's your take on the weird photograph? Share your thoughts with us at the Coast to Coast AM Facebook page.