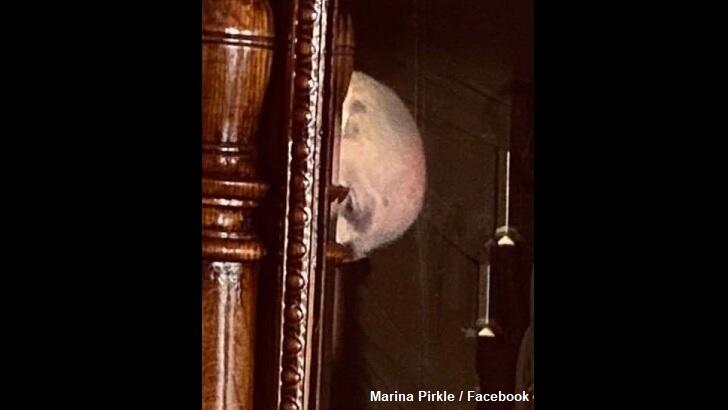 An eerie picture taken at a notoriously haunted hotel in Colorado features what some suspect is the head of a spirit caught on film. The spooky photograph was taken on Sunday evening during a ghost tour at the Stanley Hotel which famously served as the inspiration for the Stanley Kubrick film The Shining. The group's guide, Marina Pirkle, shared the image on Facebook and provided a bit of background as to what people were seeing.

"This was taken tonight by one of my guests on the spirit tour," she wrote, "this is the 'portal' mirror in the basement of the concert hall where people often see glimpses of other dimensions. You can clearly see a face peeking around the side there." Indeed, as Pirkle observed, there does appear to be someone's head looking out from the reflection of the mirror. The original version of the image, which the tour guide later provided, may be even spookier than the enhanced version at the potential ghost looks particularly out of the place in the scene.

Of course, one cannot rule out the possibility that the 'apparition' in the photo was someone else on the tour who happened to be in the right place at the right time, especially since guests are encouraged to take pictures of the mirror in the hopes of capturing something anomalous with their cameras. With that in mind, what's your take on the peculiar photo? Is it a ghost peering back at the group, a glimpse into another dimension, or merely a fellow visitor to the hotel that evening? Let us know your thoughts at the C2C Facebook page.

Brian Muraresku discussed his research into the use of psychedelic drugs in ancient rituals and religion. Followed by scientist Sara Seager on the search for exoplanets, and her inner struggles.