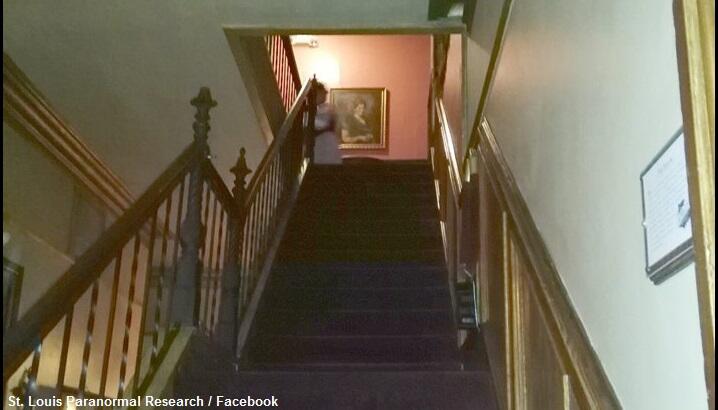 A photograph from a ghost hunting group in St. Louis seemingly shows a spirit lingering at the top of a staircase in a notoriously haunted mansion, but not everyone is convinced that it is a genuine apparition. The eerie image was reportedly taken during a tour of a palatial estate which was once owned by a powerful brewing family known as the Lemps. Beyond being merely an interesting historic site, the Lemp Mansion has long been believed to be haunted, no doubt in large part because four members of the family committed suicide inside the home.

It is that spooky reputation which drew the St. Louis Paranormal Research Society to the home last week for one of many walking tours of the area that the organization offers to tourists and thrill seekers in search of ghosts. During this particular visit, one of the attendees on the excursion snapped a photo of a staircase inside the mansion and, in the image, a distinct figure can be seen standing on the second floor. According to a Facebook post by the group, the person who took the picture was certain that no one had been standing there at the time and the organization mused that perhaps the oddity was ghost known as the "lady in white," who has previously been seen in the mansion "over the years."

As is often the case, the photo captured the imagination of people online and a number of people chimed in to share their own ghostly experience at the location. However, a troupe of actors who perform a murder mystery at the mansion soon caught wind of the image and offered their own explanation for the 'ghost.' Since the tour took place at around the same time that the performance unfolded, they argued that the 'spirit' in question was likely one of their own. "The actors' dressing room is on the 3rd floor," one cast member explained, "so it is not uncommon to see someone in weird clothes at the top of the stairs, waiting for their cue to come down."