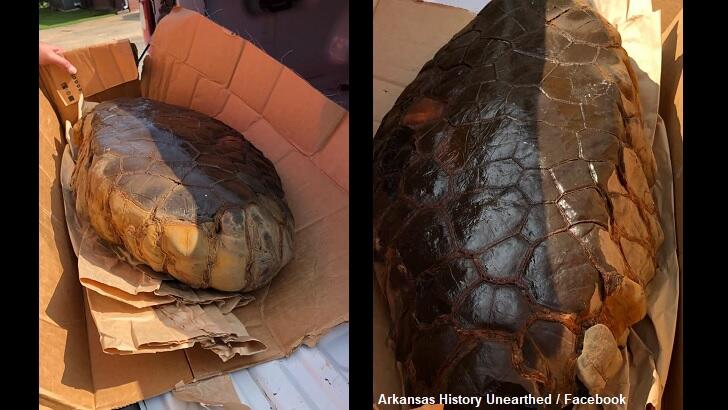 A sizeable and scaly object resembling some kind of giant egg was recently discovered in Arkansas and sparked considerable speculation online as to the nature of the bizarre oddity which, it turns out, may wind up being quite valuable. According to a local media report, pictures of the weird find were posted to the Facebook group Arkansas History Unearthed by man named Drew Baledge. Along with the strange images, he wrote that an acquaintance had stumbled upon the mysterious object in a field and asked "what, if anything could this possibly be?"

As one might imagine, given the nature of social media, there was no shortage of suggestions from people in the group. A turtle shell, fossilized dinosaur scat, and a mushroom were among the more prosaic responses, while one imaginative individual posited that perhaps it was an alien egg. Others were more concerned about what became of the two-foot-long object as opposed to what it was, cautioning against cutting into it or bringing it inside of a home.

Ultimately, the mystery of the object wound up being solved when it was determined to be a septarian nodule, which is a geological formation colloquially called a 'Dragon Stone' due to its scaly appearance. Polished versions of such stones fetch a rather high price online, which may make this particular piece worth a considerable amount of money given its prodigious size. To that end, a geologist who looked at the photos marveled that the "really unique and special" find is "a crazy looking specimen" which would be "highly prized" by Dragon Stone aficionados.