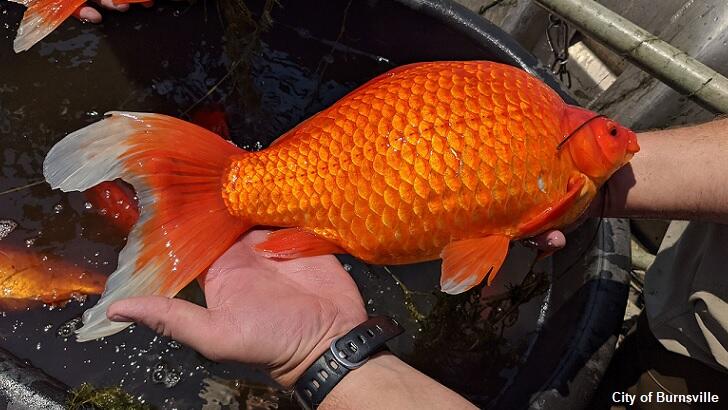 The discovery of several sizeable goldfish lurking in a Minnesota lake prompted city officials to plead with residents to stop releasing their pets into the waters as the invasive creatures threaten to overtake the local ecosystem. According to a local media report, the odd request came about after wildlife workers in the community of Burnsville recovered a jaw-dropping 18 goldfish from the city's Keller Lake. Able to thrive in this particular environment, some of the popular pet fish had grown to rather epic proportions with one measuring a foot long and another weighing a whopping four pounds.

The remarkable proliferation of the goldfish in the lake led to the city taking to social media and asking residents to stop releasing their abandoned pets into local waterways. "They grow bigger than you think," the city explained, "and contribute to poor water quality by mucking up the bottom sediments and uprooting plants." Included with the post were series of images featuring some of the recently captured goldfish which look almost monstrous in comparison to the kind one might spot swimming around at their local pet store.

While wildlife experts say that goldfish are able to survive and thrive in the cold, low-oxygen waters found in Minnesota lakes, they are still rather perplexed by just how well the creatures have adapted to living in the area. Since the discovery of the veritable invasion a few years ago, officials have been trying to solve that mystery as well as determine how to eradicate the fish before they become rooted in the ecosystem. Alas, while they work on that, the goldfish continue to grow in both number and size, suggesting that the creatures may wind up sticking around longer than anyone, especially their former owners who released them into the lake, ever expected.