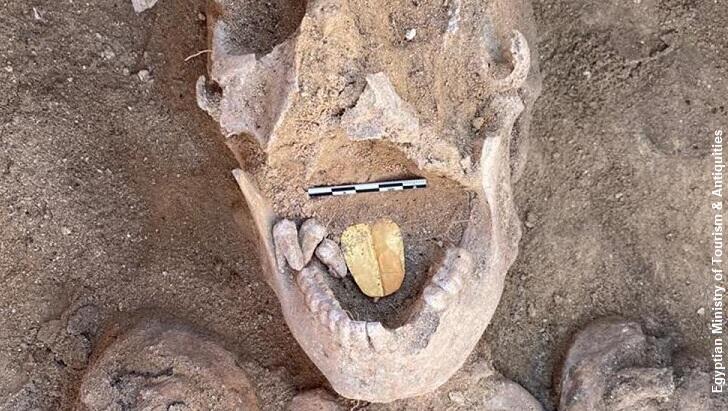 Researchers excavating a burial site in Egypt unearthed a rather peculiar mummy which sports a golden tongue that, experts say, was meant to ensure that the deceased could speak in the afterlife. The remarkable find was reportedly made at what had been a temple in the ancient city of Taposiris Magna, where archaeologists discovered the remains of 16 people who are believed to have been buried there approximately 2,000 years ago at either the end of the Ptolemaic dynasty or the start of the era in which Rome controlled Egypt.

Although the newfound mummies were said to be poorly preserved, alongside their bodies were a number of fascinating artifacts from their time among the living here on Earth. Easily the most eye-catching was one particular individual who had a golden tongue placed inside their mouth when they were buried. In a press release detailing the discovery, the Egyptian Ministry of Tourism & Antiquities indicated that this was part of "a special ritual to ensure their ability to speak in the afterlife before the Osirian court."

Other objects found adorning the bodies included golden decorative pieces depicting the gods Osiris and Horus as well as eight eerie funerary masks which were made of marble and show the faces of the mummies as they once looked. Additionally, archaeologists discovered several gold coins depicting Queen Cleopatra VII that, Egyptian officials said, "changed our perception of the Temple of Taposiris Magna" and helped to confirm their timeline for when the site had been built.