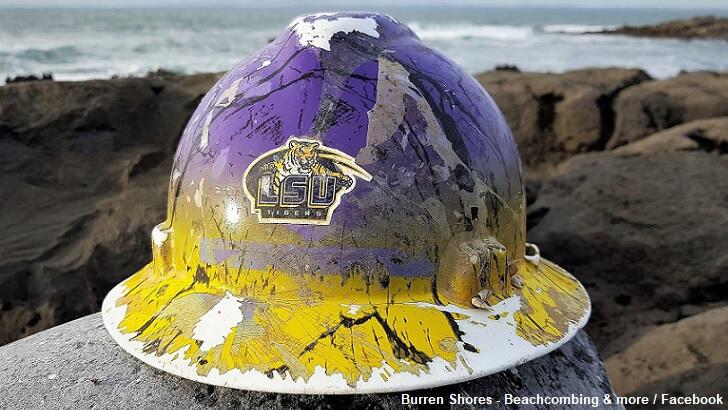 A hard hat that was lost in the Mississippi River back in 2005 is set to be reunited with its owner after the headgear was found thousands of miles away on a beach Ireland earlier this month. The strange saga began five years ago as Matthew Bonnette was working along the iconic river in the community of Belle Chasse and his protective gear, which sported a custom purple and gold paint job as well as a Louisiana State University decal, fell into the raging waters presumably never to be seen again.

However, by way of a remarkable series of events, the colorful hard hat will soon be back in his hands. That's because a beachcomber in Ireland named Liam McNamara stumbled upon the headgear sitting in the sand on a beach in the seaside village of Fanore. Intrigued by its eye-catching color scheme and decals, the man posted images of the discovery on a Facebook page devoted to such curious finds.

Amazingly, a member of the group noticed that the hard hat was emblazoned with a sticker for the International Union of Operating Engineers and a specific locality. They subsequently contacted the union, who put out a call to its members and, in turn, Bonnette was made aware that his hard hat had been found approximately 4,300 away from where he lost it. McNamara now plans to send the hard hat back to its owner in Louisiana.