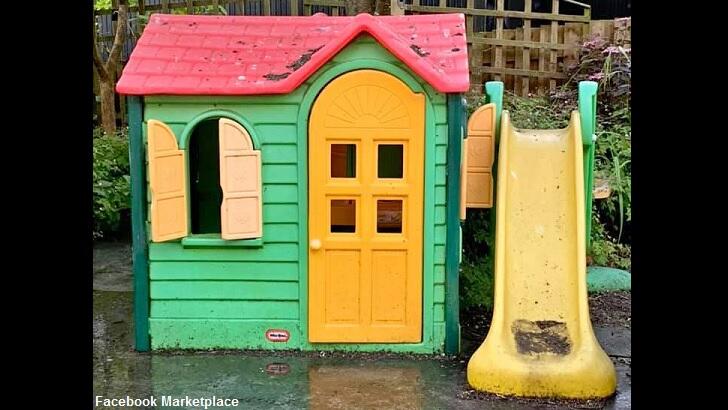 'Haunted' Playhouse for Sale in Scotland

Scottish Facebook users searching for a potential steal on the site's 'marketplace' feature spotted a rather spooky item that was put up for sale over the weekend: a children's playhouse that is allegedly haunted. The weird offering was posted by an Edinburgh dad named Ben Gough-Cooper, who claimed that his kids "refuse to play in it on the basis that it is haunted and/or possessed." As to who might want such a thing, the prospective seller suggested that it would be "good for an apocalypse-themed garden and/or ghost friendly household."

Included in the ad are a number of photos of the playhouse which, at the very least, seem to confirm Gough-Cooper's claim that his kids won't go near it, because it is positively filthy and seems to have been sitting in his backyard for quite some time. While some may understandably be skeptical of the dad's assertion that the object is possessed and wonder if his story is merely a clever way of garnering extra attention for the ad, which is clearly did, they can pretty easily put his tale to the test since the asking price for the playhouse is a meager 30 dollars.