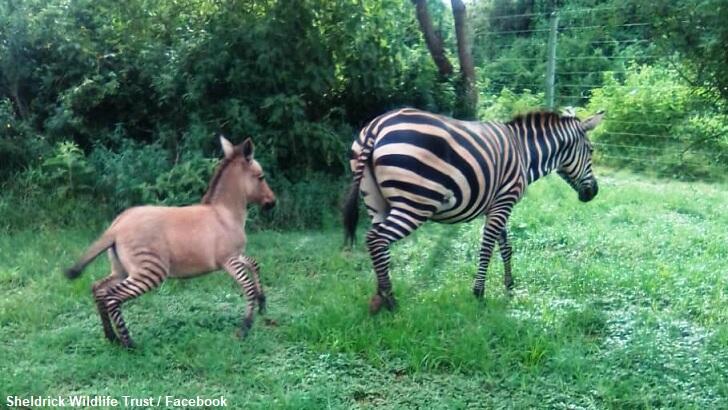 The staff of a wildlife conservation area in Kenya were amazed to discover that a zebra-donkey hybrid, known as a zonkey, had been born at the site. Described in an announcement by the Sheldrick Wildlife Trust as a "highly unusual creature," the remarkable-looking animal sports a breathtaking coloration in which the body of a donkey seemingly blends into the legs of a zebra. "Working with wildlife," they marveled, "one learns to expect the unexpected. Even the most seemingly straightforward story can eventually reveal its true stripes and end up surprising us all."

As for how the wondrous zonkey wound up at the reserve, the group explained that last May they had rescued a zebra which had wandered out of the wild and into a community where it became "an honorary member of a local woman’s cattle herd." The creature swimmingly adapted to living at the conservation area and her tale seemed to come to an end until earlier this year when workers spotted "a tiny foal by her side."

Initially thinking that the creature's curious coloring was simply because it "it had just been wallowing in the mud bath." However, upon closer inspection, they realized that "our wayward zebra had given birth to a zonkey!" Based on the animal's twelve-month gestation period, the organization concluded that the creature had been created following an encounter with "an amorous donkey" during its time living among the cattle in the local village.