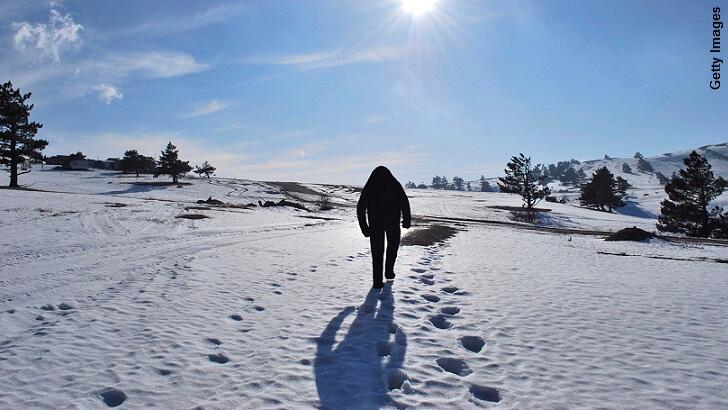 A British hiker has revealed photos of a remarkable set of possible Yeti footprints that he discovered while trekking through the Himalayas in Bhutan.

Steve Berry claims that he spotted the trail of prints while exploring an area known as Gangkhar Puensum, which locals claim had never been visited by people before.

The enigmatic imprints appear to come from a bipedal creature since they were seemingly in a single file line and, Berry says, were larger than a normal human footprint.

When Berry's expedition returned from the remote region, a conversation with a yak herder about the Yeti strengthened his resolve that the prints were possibly from the mysterious creature.

The herder recounted his own encounter with the infamous cryptid and mentioned that Yeti prints are distinguishable by their single file nature.

A gob smacked Berry then showed the man his photos of the prints he had discovered days earlier and the herder expressed certainty that they were from the legendary Abominable Snowman.

While one might think that such a find would be cause for celebration in the cryptozoology community, that is far from the case.

Noted cryptozoologist Jon Downs of the famed Centre for Fortean Zoology has already expressed skepticism over the prints.

He suggests that the location where they were found is too steep for anything but a mountain goat to traverse and dismissed the possibility that they came from a bipedal creature.

Other suspicious skeptics point to Berry's business selling tours of the Himalayas as a possible reason why the prints may be more 'promotional' rather than profound.

Berry's photos and story will be showcased on a British TV special later this year.

Unless more detailed versions of the images or additional photos come to light, it's likely that the alleged prints will be a source of debate in the cryptozoological community for quite some time.