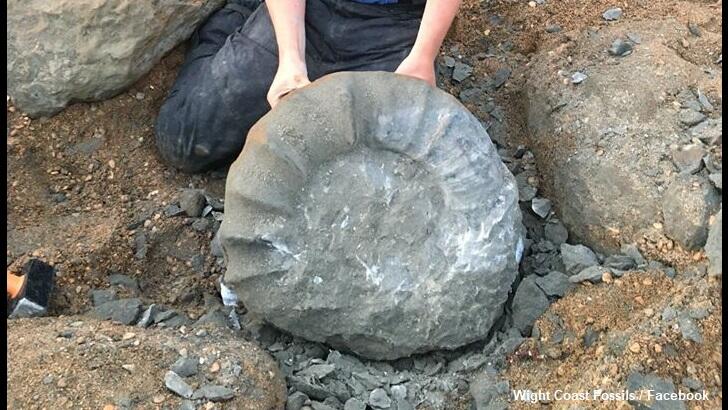 A pair of college students in England could not believe their eyes when they unearthed a massive fossil of an ancient shelled sea creature. The remarkable find was made by fossil hunters Jack Wonfor and Theo Vickers earlier this month as they were looking for specimens along the shore of the Isle of Wight's Chale Bay. This particular expedition proved to be quite fruitful when they stumbled upon the fossilized remains of a species of ammonite known as Tropaeum bowerbank which resided in the waters of the region 115 million years ago.

Showcasing the find on their Facebook group Wight Coast Fossils, the pair said that the monstrous fossil weighed a whopping 211 pounds and measured a jaw-dropping two feet in diameter. As one might imagine, extracting the enormous fossil was a considerable challenge for the two young men, who indicated that "it took two hours of arduous work to remove the ammonite from the nodule it was encased in and a further eight hours to safely get the ammonite up and off the coastline."

Based on their assessment of the discovery, the duo postulated that it was probably a large female ammonite and that a missing rib on the fossil was likely "evidence of deformities or damage incurred during its life that impacted shell growth." They also observed that the creature's remains served as a home to other marine animals following its death as they found additional fossils of smaller organisms attached to the shell. The pair now plan to spend the next few weeks cleaning up the specimen " in the hope we can restore this Isle of Wight giant to how it may have once looked over 100 million years ago."