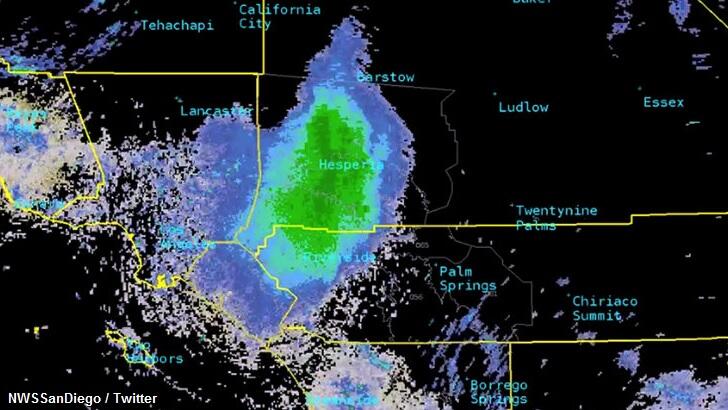 A National Weather Service radar keeping an eye on southern California detected a rather remarkable phenomenon in the form of a massive bloom of ladybugs. The jaw-dropping radar return was shared by the NWS San Diego Twitter account on Tuesday evening in a post which noted that the "large echo" moving over the region may have resembled precipitation, but was actually a huge cloud of the colorful insects. A meteorologist with the agency told the LA Times that the ladybug bloom looked to cover an area of around 80 miles with a 10-mile wide section that was particularly packed with the creatures.

While most observers found the enormous cloud of ladybugs to be quite wondrous, one area expert raised issue with the fantastic story. Ecologist James Cornett expressed considerable doubt to the Palm Springs Desert Sun, arguing to the newspaper that a bloom of that size would have required ladybugs numbering in the "tens of millions," which he found questionable. He also posited that, if a swarm of insects that size passed over the area, "there would have been unbelievable numbers of telephone calls to the police."

His misgivings about the ladybug bloom claim appear to be upended by a weather watcher on the ground at the time who reported to the NWS that the area was overrun with insects at the time and that they appeared less like a cloud and more like just tiny specks flying through the air. Another meteorologist in the area also indicated that there was no weather phenomenon that could account for the unique-looking radar reading. In response to these details, Cornett conceded that "I'm not the last word on ladybugs, but it sounds so unusual to me" and ultimately joked that "the world must be coming to an end."

The large echo showing up on SoCal radar this evening is not precipitation, but actually a cloud of lady bugs termed a "bloom" #CAwx pic.twitter.com/1C0rt0in6z