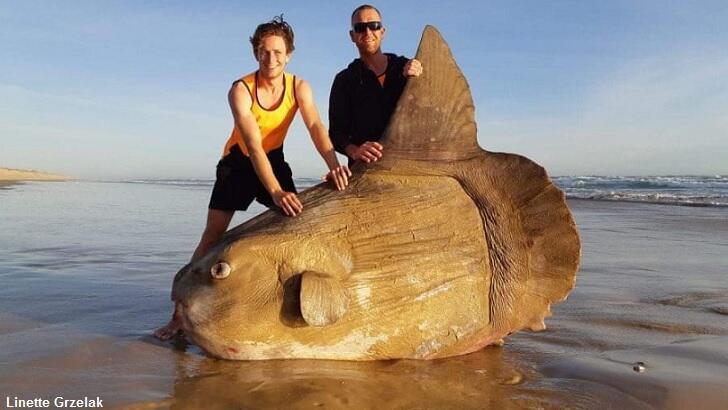 A fisherman in Australia could not believe his eyes when he stumbled upon an enormous sunfish that had washed ashore. The jaw-dropping find was reportedly made at the mouth of the Murray River this past Saturday. According to the partner of the astounded fisherman, he and his work crew initially suspected that the giant fish was actually "a piece of shipwreck" until they got closer and realized it was a creature.

Remarkably, this particular specimen of sunfish, known scientifically as a 'Mola mola,' is only a medium-sized version of the species. In a post sharing photos of the discovery, the National Parks Department of South Australia explained that the creature is "the world’s largest bony fish and can weigh more than a car." Fortunately, while the fish's significant size may make it look intimidating, marine experts say that they pose no danger to humans, but can be hazardous to boats simply by getting in their way.

One noteworthy aspect of the find made at the Murray River is that the location is an unlikely place for such a fish to appear as they are usually ocean-bound. And, strangely enough, the Australian story comes on the heels of an eerily similar story in which a different species of sunfish washed ashore in California earlier this month and constituted the first time in 130 years that such a creature had been seen in the northern hemisphere. Why, exactly, sunfish keep popping up in unexpected locales lately is a mystery, but hopefully it's not some kind of ominous warning of things to come.