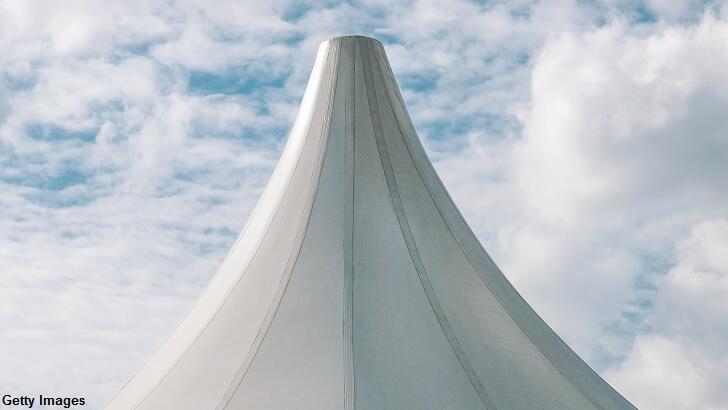 In a truly bizarre story out of New Mexico, two men claim that they had a close encounter with what may have been a UFO resembling a circus tent and its alien occupants during a recent hunting trip. Josh Brinkley and Daniel Lucero told the Santa Fe New Mexican that their puzzling experience occurred over Labor Day weekend on a mountain known as Cerro de la Olla near Taos. The duo had been camping at the site for the start of bow hunting season with the hopes of bagging some elk, but they wound up coming home with a far more fantastic story to tell.

The weirdness began on the morning of September 1st when the two men were on opposite sides of a field waiting for elk to emerge from the nearby tree line. According to Brinkley, he grew bored with this tactic after about three hours and chose to start hiking through the woods in search of the animals and eventually wound up at the top of the mountain. It was there that he allegedly spotted what initially appeared to be two people "standing side by side, staring right at me" about 35 feet away.

Brinkley walked across the field between them with the intention of speaking to the two strangers, but when he briefly looked away to maneuver around a bush, they had vanished. Looking back on the encounter, the bow hunter recognized that there was something odd about the duo. "The shape that would be like their heads, it looked like they had huge hoods on," he recalled, "looked like two ribbons coming off either side to a point at the top and bottom ... in the middle of the oval was just gray."

The hunters' trip took an even stranger turn the following afternoon when Brinkley and Lucero grew frustrated by the fact that they had yet to see a single elk and decided to drive around in their jeep looking for them. Along the way, they soon realized that not only were there no elk in the area, but it appeared as if all of the wildlife had fled the scene. The reason for this may have revealed itself when the men noticed a puzzling, out of place structure, for lack of a better term, about a quarter-mile away from them.

"It's this big tent structure, like a circus tent — 50, 60 feet tall," Brinkley recounted to the newspaper, "coming off the left of it was this long building, almost like what you would build for an archery lane for target practice. It was a third the height, but really long, maybe a couple hundred feet." Amazingly, much like the two mysterious people that he had seen the previous morning, the baffling building disappeared during a brief moment when their vehicle went down a hill and they had lost sight of it.

The incident proved to be so powerful that the pair continued driving around the area until dark with the hopes of seeing the structure again, but it never returned. "I just know it was real," Brinkley declared, "it was huge and white and then gone." As one can imagine, the wondrous weekend has left the duo scratching their heads as to what they may have encountered on the mountain. Asserting that they were completely sober during the trip, the pair conceded that people will likely doubt their story, but they insist that it really happened.

Given the sizeable nature of the structure as well as how both it and the beings disappeared in an instant, the hunters' report has stirred speculation that they had some kind of encounter with a UFO and its occupants. For his part, Brinkley seemed to agree, noting that the experience has made him a believer in the phenomenon. Meanwhile, Lucero wasn't quite ready to go that far and, instead, simply marveled that "I've never seen anything that big just disappear." What's your take on the duo's fantastic story? Share your thoughts at the Coast to Coast AM Facebook page.