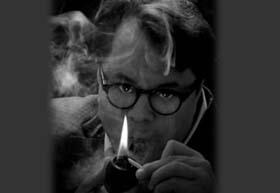 Ian Punnett was the featured guest during our one-hour Live Chat on 2/23/11. Below are excerpts (Coast Insiders can view the full transcript) in which he discusses ancient religious literature, paranormal experiences, and some of his favorite show topics.

JawjaChris
Ian, do you think Bart Erhman is accurate in saying many Bible manuscripts were altered by scribes?

Ian Punnett
Yes, there really isn't any doubt that some MSS in the Bible have been altered. They are called "scribal errors" and they are fairly common, although not every scholar will agree on every error. Some of them are ridiculously obvious.

John334
Do you read any Vedic literature, such as the Bhagadvad Gita? Hinduism includes Jesus in their scriptures apparently.

Ian Punnett
I have read parts of the BG and I have studied Hinduism from time to time. I love other traditions' literature.

JP VIDEO
Do you believe Jesus lived in India during his vacant 19 years?

Ian Punnett
It's possible. Marcus Borg proffers that but there is no proof of it. Also, Jesus wouldn't have had to live in India to be influenced by it.

b_dubb
Do you think the Gospel of Judas is credible? Fake? Really old fiction?

Ian Punnett
It was pseudonymous, to be sure, but that doesn't mean it was fiction. It just wasn't written by Judas. Just because it's not factual doesn't mean it's not truthful.

wikedwitch1980
Have you ever had a scary paranormal experience?

Ian Punnett
Sure, major UFO sighting, a couple of ghostbusting trips to cemeteries and one night where I had to sit up with the dead. That was weird.

wikedwitch1980
What happened with the UFO? What did it look like?

Ian Punnett
My story is too long to tell here but I mention it from time to time. Pretty cool--it was a tri-sighting.

Jaudon
Ian, have you actually seen a ghost? Briefly, what did it look like? I haven't been lucky enough to see anything.

Ian Punnett
No, but felt one. Saw a light bouncing with no explanation, heard music with no source (that I could find) but did not see a full on specter.

girlgriffin711
Who has been your favorite coast guest that you've interviewed?

Ian Punnett
Lately--and only lately--it was Gary Jenson who wrote "Holy Ghosts." I just love that book and we have become very good friends. We just emailed today. I am partial to the guests that I become friends with (about three dozen or so).

misswebbie
I noticed sometimes you are pretty cynical with the guests that have unusual experiences. Since C2C is mainly based on the unusual, do you think your attitude is in conflict with the basis of the show?

Ian Punnett
I think you mistake that with skeptical and I am fine with that. I am not cynical by nature.

jreader
You do some great shows with a music theme, what is your favorite band?

Ian Punnett
It all starts with the Beatles, doesn't it? That having been said, I've been digging LCD Soundsystem lately, Beethoven's #7 and Alan Jackson.

Joe in NJ
I thought your interview with Al Jardine was very good.

Ian Punnett
He was cool. I love rock shows. Never quite sure how they belong on Coast but if Art can do Crystal Gayle (so to speak), I should be able to do a Beach Boy (so to speak).

JawjaChris
Do you ever have problems with guests who like to use a lot of foul language or is that something you fore-warn them about?

Ian Punnett
Yes, when one guy was hammered (or high) on the air. He was an ass and he kept swearing.

JLW
You are always so prepared, but you were a bit blindsided by Will Elliott. How did you feel about that whole mess?

Ian Punnett
I was completely blindsided by that because I had read his book and all his promotional material. I believe he had recently come off his meds and just didn't tell any of us about it.

tunicapokerdealer
What prediction(s) from this year's show do you believe has the best chance of coming to fruition?

Ian Punnett
That if oil hits $150 our recent economic gains will get wiped out. Other than that, our greatest fear will be our prosperity--again.

Bret
I was pretty bummed about the interview with the guys from Cracked, but since the topic was zombies, any chance of having Max Brooks back on sometime?

Ian Punnett
I wish I could have Max Brooks on but I do have a much, even cooler Zombie show on the way to thrill your BRAINS!!!

aaron
Are there any subjects you prefer to not explore while on the air?

Ian Punnett
I don't love shows about politics or when conversations go there. Whether it's a purely liberal jag or some conservative rant, when a guest can only see things through a political filter, it gets boring to me.

Joe in NJ
Any upcoming guests you would like to let us know about?

Ian Punnett
Yes, "The Myth of the Great Ending" is on the way!