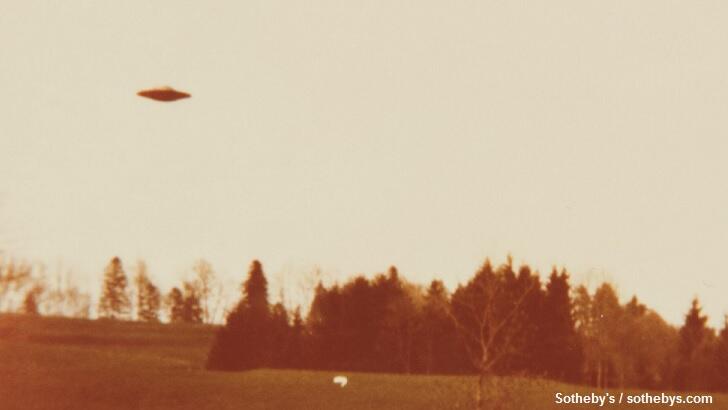 A massive sale of space-related photos being conducted by famed auction house Sotheby's includes a rather surprising offering for would-be bidders: sets of purported pictures of flying saucers that were taken by alleged ET contactee Billy Meier. The images are part of a week-long online sale which began on Tuesday and features photos from a vast array of NASA missions including the historic Apollo 11 moon landing. For reasons unexplained, except perhaps that they are tangentially space-related, three sets of Meier UFO photos from the 1970s are included in the various lots up for auction.

According to a description by Sotheby's, the pictures were taken in Switzerland by the self-proclaimed contactee and "purport to depict an interstellar visit by spacecraft from the planet Erra. The auction house also marvels that they are "among the most highly publicized and well-documented images of UFO phenomena ever recorded." While longtime researchers may doubt the veracity of the photographs, their impact on pop culture is undeniable as Sotheby's notes that one of the photos "was used to create the famous 'I Want to Believe' poster featured in the hit TV series The X-Files."

These particular photographs which are currently up for auction were obtained by Lt. Col. Wendelle Stevens, who acquired potential flying saucer pictures for Project Blue Book and later became an independent researcher who was a strong supporter of Meier's claims of having been in contact with proverbial 'space brothers' The opening bid for the images is $4,500 for two of the photo sets and $3,000 for the third series of pictures. While it is doubtful that UFO enthusiasts will cough up the money to purchase the prints, it would not be too surprising to see an X-Files aficionado snap up the photos to add to their collection of memorabilia from the beloved TV show.