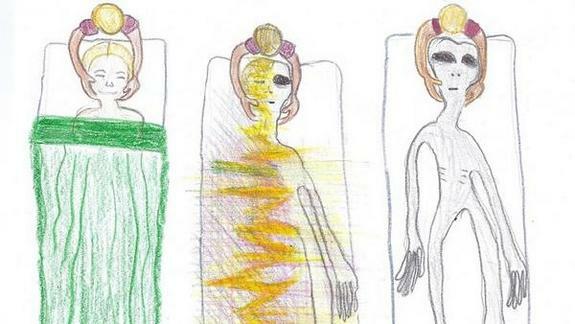 In conjunction with her appearance on the 9/25/2015 edition of the program, Earthfiles investigative reporter Linda Moulton Howe, shared this illustration submitted to her by Chicago licensed massage therapist, Cinde Shilf, who had the startling experience of working on a female client and seeing her momentarily transition into a Grey non-human, and then quickly back to herself. The drawing depicts the experience from her point of view, with her hands at the base of the woman's head, when the "electrostatic" transition occurred and shocked Shilf, who is the third such report from professional massage therapists that Linda has received since the 1980s.

According to Shilf, during an otherwise normal massage, a grid-like transparent electrical field appeared to diffuse a holographic image of her client and a 'grey' alien began to appear. The strange process continued until the holographic image of the woman disappeared completely to reveal a full grey alien.

What does it mean? Anyone who has had, or knows about, a similar phenomenon, please email Linda Moulton Howe, reporter and editor of Earthfiles.com at earthfiles@earthfiles.com.