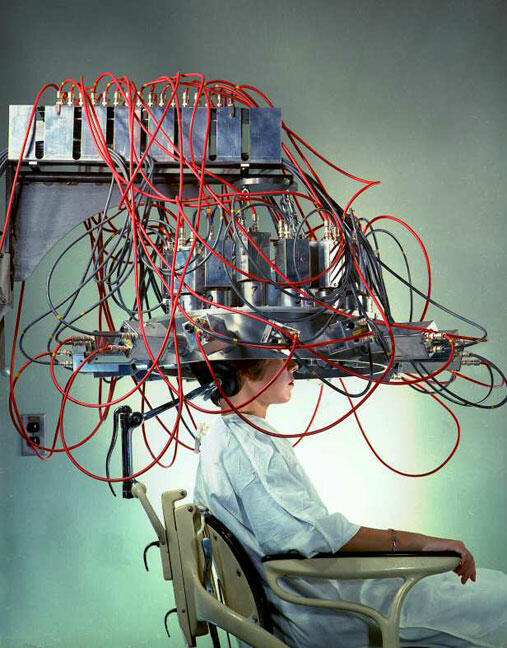 In tandem with his 11/17/11 appearance, Dr. Cliff Pickover shares two images featured in his new work, The Physics Book: From the Big Bang to Quantum Resurrection. He describes the photos:

(left image) The spaceships on Star Trek are powered by antimatter drives, but antimatter, a kind of mirror form of matter, is real -- and it’s even possible that worlds made entirely of antimatter exist in the universe. Antimatter-matter reactions have practical medical applications today in the form of positron emission tomography (PET), which employs positron-emitting atoms. In the 1960s, researchers at Brookhaven National Laboratory used detectors, such as this, for studying brain tumors that absorbed injected radioactive material. Breakthroughs led to the more practical PET machines of today. (Courtesy of Brookhaven National Laboratory.)

(right Image): Artistic rendition of Laplace’s Demon observing particles (represented here as bright specks) at a particular instant in time. In 1814, French mathematician Pierre Laplace described an entity that was capable of calculating and determining all future events, provided that the demon was given the positions, masses, and velocities of every atom in the universe and the various known formulas of motion. In a universe with Laplace’s Demon, would free will be an illusion? (Image by Solvod.)