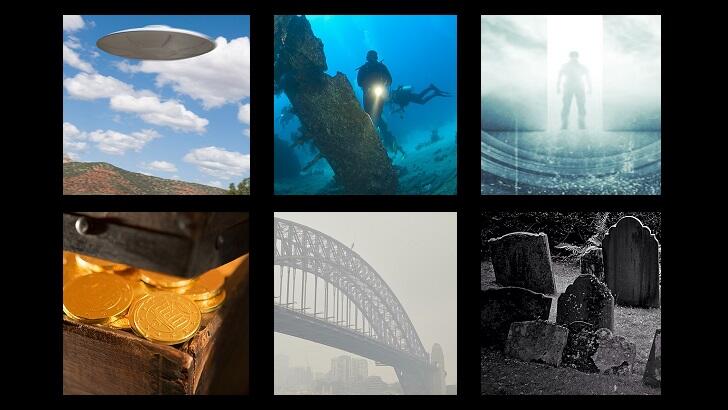 Paranormal hotspots, weather manipulation, and spirit communication were among the fascinating realms explored this past week on Coast to Coast AM. And, here at the C2C website, we told you about a treasure hunter's misadventure in Yellowstone National Park, the discovery of a ship lost in the Bermuda Triangle, and an eerie voice heard by a ghost hunter exploring a cemetery in Pennsylvania. Check out our round-up of highlights from the past week ... In Coast You Missed It.

Is our weather being manipulated by clandestine forces using exotic technology? Activist Dane Wigington tackled this troubling question on Monday night's program and detailed his research into what he believes is an intentional disruption of our environment known as 'geoengineering.' Explaining that part of this process involves filling the sky with particulates designed to fight global warning, he argued that these chemtrails, as they've come to be called, are having a deleterious impact on the planet by way of droughts and dry conditions which ultimately spawn wildfire.

In the latest twist surrounding the Forrest Fenn treasure, it was revealed this week that the now-notorious hunt had nearly claimed its fifth victim earlier this month when an Indiana man got stuck in a canyon at Yellowstone Park while looking for the riches and needed to be rescued. Dave Christensen is certain that he knows where the elusive cache of gold and jewels is located and claims that he ventured into the treacherous gorge to document its location. Alas, it would seem that the only thing the treasure hunter found was trouble as he ultimately ended up receiving a pair of misdemeanor citations for the ill-advised search.

Communicating with the 'other side' was a hot topic of conversation on Coast to Coast AM this past week, beginning with Tuesday night's program in which author Suzanne Falter shared her personal story of connecting with her daughter who had passed away at the age of 22. Then, on Wednesday evening, hypnotherapist James Schwartz talked about how hypnosis can be used to connect with spirit guides and the spiritual realm. And, finally, on Thursday night's show, C2C investigative reporter Cheryll Jones spoke with psychic medium Janice Carlson, who shared techniques for talking to departed loved ones.

A classic paranormal mystery found its way back into the headlines this past week when it was announced that a team of researchers had located a ship that went missing in the Bermuda Triangle nearly a century ago. The SS Cotopaxi disappeared back in 1925 while traveling from South Carolina to Cuba and subsequently became one of the more iconic incidents connected to the infamous hot spot where planes and ships inexplicably vanish. However, thanks to an exhaustive search from the TV series Shipwreck Secrets, a previously unidentified wreck off the coast of St. Augustine, Florida was determined to be the long-lost vessel.

While Skinwalker Ranch may be the most famous American location with a reputation for odd paranormal activity, Tom Dongo discussed his research at a similar spot in Sedona, Arizona known as the Bradshaw Ranch on Sunday night's program. Having investigated the site for a whopping four years, he recalled seeing strange lights, what appeared to be evidence for Bigfoot, and one particularly unsettling evening in which he heard a disembodied lion's roar. Dongo also talked about another a curious place known as the Secret Canyon, where armed guards prevent anyone from entering.

By far the most bizarre story this past week came by way of Pennsylvania, where a state trooper was dispatched to a graveyard after a ghost hunter called 911 to report hearing a disembodied voice crying out for the help. Chillingly, the paranormal investigator told the dispatcher that he specifically heard a woman declaring that she'd been buried alive. When officers arrived on the scene to investigate the matter, there was no sign of any spirit nor a person in distress, aside from perhaps the ghost hunter who was frantically digging up the ground looking for the source of the voice.