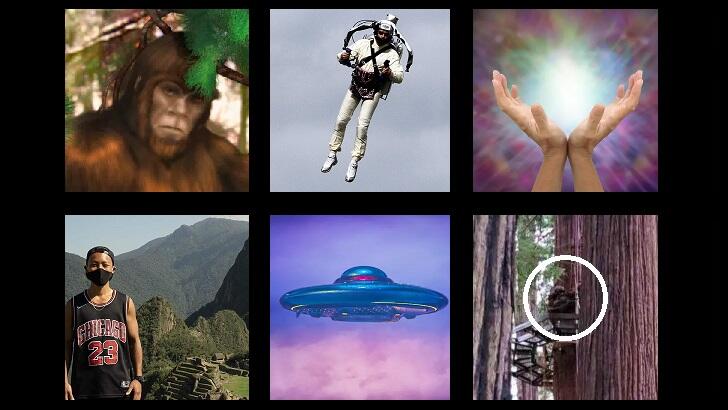 Curious cryptids, curses, and the case for UFO disclosure were among the fascinating topics discussed this past week on Coast to Coast AM. And, here at the C2C website, we told you about a possible Ogopogo sighting in Canada, a Japanese tourist who was granted a solo tour of Machu Picchu, and what may be the return of the mysterious jetpack-clad individual spotted soaring over the LAX. Check out our round-up of highlights from the past week ... In Coast You Missed It.

While bouts with bad luck being caused by a curse may seem like something of a Hollywood cliche, psychic medium Lisa McGarrity revealed that the phenomenon is actually quite real and shared tips on how to break those hexes on Monday night's program. Observing that she once thought that curses only occurred in rare instances, McGarrity revealed that this opinion changed over time as she worked with more and more clients who were victims of black magic. Beyond merely bad luck, she explained that people suffering under such proverbial dark clouds might feel fatigued, experience insomnia, or struggle with negative thoughts. Breaking a curse, McGarrity said, can be done by developing one's own positive spiritual practice and adopting an upbeat outlook on life.

A pair of iconic international landmarks popped up in the news this week by way of a pair of strange stories beginning with the famed ruins of Pompeii where officials overseeing the site were given a package from a remorseful Canadian woman who had visited there 15 years ago and stole some artifacts from the legendary city that was wiped out by a volcano centuries ago. Her reason for returning the items, she said, was because she had been cursed with misfortune ever since and became convinced that the pilfered relics were to blame. And, in Peru, a Japanese tourist who came to the country back in March to see Machu Picchu, but wound up stuck there for seven months due to the pandemic was granted a once-in-a-lifetime solo tour of the famed Inca citadel.

Bigfoot and other similarly mysterious creatures were a hot topic of conversation on a pair of C2C programs this past week. First, on Sunday night, Navajo tribal member Brenda Harris discussed her lifelong research into Sasquatch which began with a chilling childhood incident wherein a large animal, that she now believes to have been a Bigfoot, stalked her family's home. She also recounted several stories of personally seeing and interacting with Sasquatch-like creatures which, she believes, may be evil entities. Then, on Wednesday night's program, Jason McLean talked about Texas cryptids such as a Goatman, a giant owl with the face of a woman, pterodactyl-like creatures, and Sasquatch encounters including a legendary account from American hero Davy Crockett.

The past week saw two potential sightings of iconic cryptids make the news. First, in California's Sequoia National Park, a father and son admiring the location's awe-inspiring redwood trees spotted a curious anomaly lingering on a platform 50 feet above the ground. The oddity's dark appearance and seemingly humanoid form led them to wonder if perhaps they had just seen Sasquatch. Alas, as often happens, when they moved further down the trail to get a better look at the possible beast, it had vanished. Then, a Canadian man visiting his family in British Columbia caught sight of an odd form on the water of Okanagan Lake which he suspects could have been the site's legendary 'monster' known as Ogopogo.

Legendary author and famed experiencer Whitley Strieber returned to Coast to Coast AM on Thursday night to share his thoughts on the latest happenings surrounding the UFO phenomenon and the possibility that the government may finally disclose the truth about the perplexing enigma. He offered three possibilities for why the 'powers that be' may be covering up the reality of the phenomenon: the 'aliens' insist on it, the truth is actually profoundly negative, or the information is classified due to its connection to clandestine weapons technology. Strieber mused that the recent interest surrounding UFOs has led to all manner of conspiracy theories blooming and postulated that the only way to put an end to such speculation is for the government to end their secrecy about the subject.

A mysterious incident from a few weeks ago got something of a reprise this week when pilots flying near Los Angeles International Airport reported seeing a person wearing a jetpack cruising through the sky. The very weird sighting follows a similar case from late August, suggesting that there is either a foolhardy individual behind the first event that decided to take flight once again or it was a copycat rocketeer trying their hand at the ill-advised stunt. The unidentified flying person was not the only aerial strangeness to occur this week as a helicopter pilot dropping water over California's wildfires was stunned when an owl managed to pull off the incredibly rare feat of getting aboard the craft as it was in mid-flight.