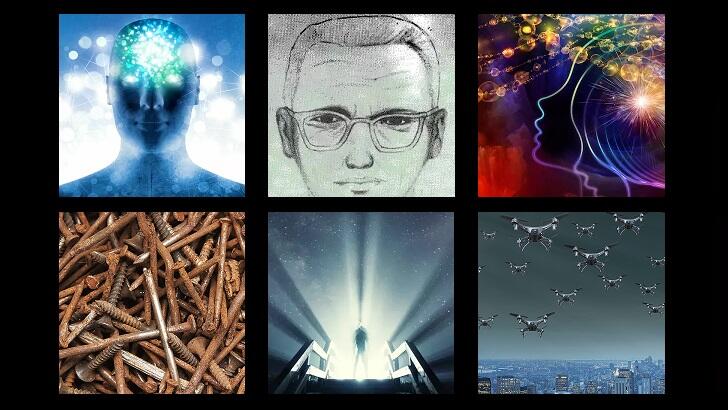 Past lives, future events, and mysterious 'glitches in the matrix' were among the fascinating realms explored this past week on Coast to Coast AM. And, here at the C2C website, we told you about the Zodiac Killer possibly being identified, a drone light show that went wildly awry, and a man in Lithuania who ate over two pounds of metal. Check out our round-up of highlights from the past week ... In Coast You Missed It.

In the realm of the paranormal, there are some incidents that seemingly defy classification. Author John Olsen detailed these 'glitches in the matrix' on Tuesday night's program, suggesting that they could be glimpses of a parallel world. He shared one particularly puzzling case wherein a man went to a pharmacy to pick up some medicine for his boss and suffered a dizzy spell while at the store. Suddenly, Olsen recounted, the layout of the building changed and the man saw his brother in an adjacent aisle. Upon returning to work, his boss informed him that he had been gone for two hours, despite the trip seeming to last only 30 minutes, and when he later called his brother to ask about the experience, the man learned that he was on vacation and nowhere near the store.

A pair of classic mysteries found their way back into the news this past week by way of some eyebrow-raising potential breakthroughs. First, a 'lost' recording of an interview with Albert Einstein's assistant was unearthed and, in the conversation, Dr. Shirley Wright revealed that the famed physicist was enlisted to examine the Roswell wreckage and that the two of them were brought to a mysterious hanger where they saw the downed craft as well as alien beings. Meanwhile, a team of cold case investigators made worldwide headlines when they declared that they had identified the Zodiac Killer and pointed the finger at a man named Gary Francis Poste.

Past life regressions took center stage on Wednesday night's program as hypnotherapist Steve Burgess discussed his extensive work connecting people with their previous incarnations and using these sessions to improve their lives. He explained that individuals can carry traumas not only from their present lifetime, but also from past lives as well as from our ancestors. Burgess observed that his clients are often afflicted with seemingly inexplicable phobias, such as a fear of flying, that is actually connected to how they died in their previous incarnation and by exploring this aspect of their life cycle, he is able to help them overcome these issues.

One of the wilder videos we've seen in a while popped up online this past week via an event from China wherein a drone light show went wildly awry and led to the UAVs raining down upon a crowd of spectators. The dystopian moment occurred at an anniversary celebration for a prominent shopping center in the city of Zhengzhou. The culmination of the evening was to be a breathtaking drone performance featuring 200 craft coming together to spell out the name of the mall. Alas, moments after the UAVs took to the sky, dozens of the drones began to falter and then started dropping from the sky onto stunned observers who were forced to duck for cover lest they be struck by the 'dead' craft.

With 2021 winding down, one can be forgiven for wondering what the remainder of the year might bring as well as what events may unfold beyond that. On Thursday night's program, psychic Elizabeth Joyce shared her astrological predictions for future events, including the possibility that President Biden may step down sometime around January due to health reasons. She also cautioned that COVID will surge in the fall and winter, but finally fade away around July of next year. Joyce also envisions fugitive Brian Laundrie hiding somewhere south of the border in Mexico or Costa Rica and a potential invasion of Taiwan by China sometime after the 2022 Winter Olympics.

By far this past week's most bizarre story unfolded in Lithuania where stunned doctors removed more than two pounds of metal objects, like screws and nails, from the stomach of a man who told them he became compelled to eat the dangerous material after he had quit drinking. The unnamed patient explained that the strange affliction began about a month ago when he decided to embrace a sober lifestyle. However, in what is believed to be the result of alcohol withdrawal syndrome, he suddenly began scarfing down the various pieces of metal until he experienced abdominal pain and went to the hospital for help. Surgeons spent three hours removing the objects from man, who is now recovering and under observation in the hospital.