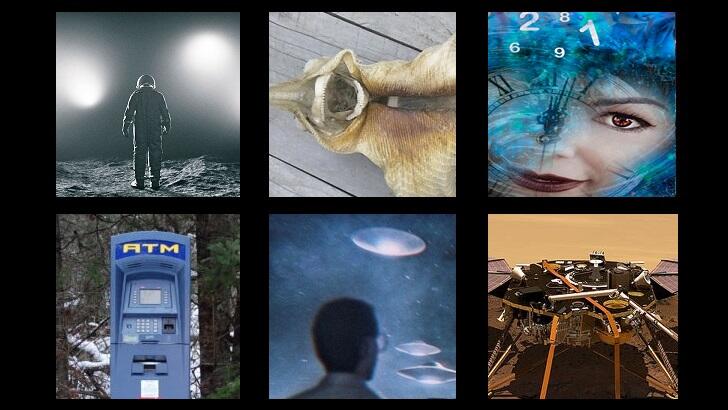 Clandestine Apollo moon missions, Bob Lazar's Area 51 revelations, and a numerological forecast for 2019 were among the topics discussed this past week on Coast to Coast AM. Meanwhile, here at the C2C website, we told you about a pair of odd New England mysteries, celebrated a historic NASA landing on Mars, and a possible alien skull discovered in China. Check out our round-up of C2C highlights from the past week ... In Coast You Missed It.

The story of Bob Lazar, one of the most legendary cases in UFO history, took center stage on Sunday night as the Area 51 whistleblower made a rare appearance on the program alongside filmmaker Jeremy Corbell. The duo and host George Knapp, who broke Lazar's story of working at the secret military base back in 1989, revisited the controversial case which has inspired spirited debate in UFO circles for decades. The conversation featured Lazar and Knapp's fascinating first-hand perspectives on what it was like to reveal Area 51 to the world and the unsettling aftermath of the story going public.

This past week saw two very different mysteries in New England make headlines. First, there was the sudden and inexplicable appearance of a perfectly intact ATM near a forest in Maine. Since the machine was not smashed open, authorities suspect that the puzzling find was the work of pranksters. On a darker note, the FBI announced a rather hefty reward for information which could help solve the unsettling case of an animal sanctuary in New Hampshire that is being tormented by an extortionist. This twisted miscreant is said to have sent cryptic letters the ranch demanding money and then proceeded to reign terror upon the owners and their animals when they refused to pay.

Rumors that there were secret Apollo moon missions conducted after NASA had officially shut down the program have long circulated among conspiracy theorists. On Thursday night's program, investigative journalist Linda Moulton Howe shared a riveting interview with a man who claims to have been one of the astronauts on these clandestine journeys. Over the course of three hours, Jon Harold Lavine recounted his experiences, sharing stunning information about ET encounters while exploring the lunar surface and how the human race was apparently told by the aliens never to return.

Space enthusiasts were rejoicing this past week and NASA officials were breathing a sigh of relief as their InSight Lander successfully touched down on Mars following a dramatic plunge through the atmosphere of the Red Planet. Over the next two years, the craft will study the interior of Mars using an array of sophisticated equipment which will provide a wealth of new data about the mysterious world. Those insights should prove critical should humans finally make the leap to the Red Planet, which is a scenario that seems a lot less fantastic than before thanks to a new plan unveiled by NASA this week to take astronauts back to the moon and beyond.

With 2018 coming to a close in a few short weeks, the question of what the new year may bring is soon to be on everyone's mind. On Wednesday night's program, numerologist Glynis McCants helped to kick off this annual transition from one year to the next by sharing her thoughts on the role numbers played in the last 11 months being so tumultuous as well as how 2019 looks to be something of a 'lighter' period which will see more of an emphasis on "trying to find ways to laugh and have fun." Fortunately for those eager to get the party started, she noted that the numerology of December suggests that it will mirror much of the mood of the new year.

One of the more bizarre stories to appear in the news this week centered around an alleged ET skull purportedly obtained by a UFO researcher in China. The strange-looking object was reportedly given to the researcher by a man who spotted the oddity among the offerings of a street vendor in Inner Mongolia. Measuring around six inches in diameter, the weird item does look rather alien, although the same could be said about a weird sea creature that recently washed ashore in New Zealand and that turned out to be pretty prosaic. So it would probably be wise to wait for further tests to be done on the alien skull before popping the champagne bottles.