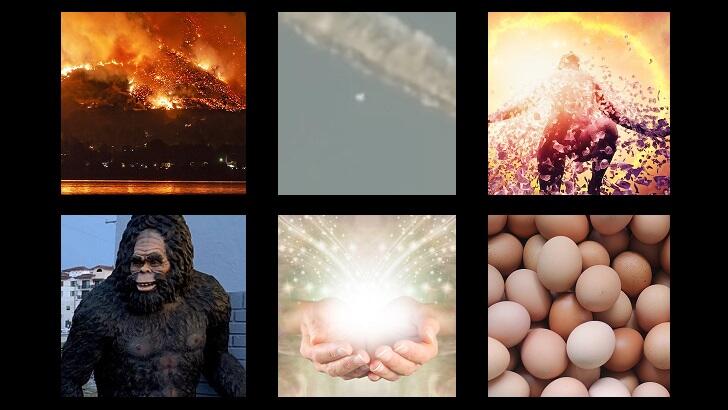 Connecting with angels, Biblical prophecy, and past life experiences were among the fascinating realms explored this past week on Coast to Coast AM. And, here at the C2C website, we told you about several strange sights in the sky, a massive Bigfoot statue that went missing in Florida, and an unfortunate Indian man who died while trying to eat 50 eggs in one sitting. Check out our round-up of highlights from the past week ... In Coast You Missed It.

The prospect that people may have had past lives has long intrigued paranormal researchers and spiritual explorers. On Tuesday night's program, Michael Goddart shared his personal experiences with this phenomenon as he claims to have lived more than 4,000 past lives. Remarkably, he noted that only 884 of those took place here on Earth and the vast majority occurred on other planets. Additionally, Goddart explained that these past lives can take many forms as he was purportedly once a bush as well as a cow.

Two strange tales of thievery made news this past week with decidedly different outcomes. A massive one-ton boulder that had become a popular landmark in an Arizona national forest until it was somehow stolen last month was surprisingly returned to the location by what we assume were repentant individuals who didn't realize that it was a beloved community fixture dubbed 'Wizard Rock.' Meanwhile, an 800-pound Sasquatch statue was stolen from outside of a mattress store in Florida. Police there are hoping that the public can help identify the 'Bigfoot bandits' or offer information on where the eight-foot-tall piece may have gone.

As we living through the End Times as predicted in the Bible? This troubling question was explored by author Benjamin Baruch on Sunday night's program. He cautioned that his interpretation of current events as compared to Biblical prophecy suggests that we are on the precipice of a global nuclear war that could unfold in the not-too-distant future. Chillingly, he postulated that a mere 30 million Americans would be fortunate enough to survive such a massive worldwide conflict. Baruch also talked about how climate change could be due to neutron stars heating the core of the Earth.

Strange aerial anomalies seemed to dominate this past week's news cycle with three remarkable cases making headlines. First, a witness in Florida filmed a bizarre series of clouds that many likened to a proverbial 'stairway to heaven.' Following that, a Bigfoot researcher in Colorado caught sight of some chemtrails and, much to his astonishment, spotted a UFO while he was filming the mysterious mist exiting the airliner. And, finally, a woman in Philadelphia photographed a puzzling triangular shape, that some suspect could be a secret spy plane, looming in the sky over the city.

Angelic beings took center stage on Wednesday night's program as Corin Grillo detailed her work channeling and interacting with these entities. According to her, attending an 'angel reading' a few years ago transformed her life as she was advised to talk to these entities as if they were real and they would respond in kind. Amazingly, she did just that and eerie events began to occur which seemed to indicate that she'd made a connection with these entities. During her appearance on the program, Grillo also shared tips for Coast listeners on how to bring these angelic beings into their own lives.

By far the most bizarre story of the week centered around a contentious wager between two friends that ultimately left one of them dead. While visiting a market in India, Subhash Yadav and his companion got into an argument over whether or not he could eat 50 eggs. It soon escalated into a bet, which Yadav gladly accepted. This would turn into a tragic mistake as, while eating his 42nd egg, the overstuffed man collapsed and subsequently died a few hours later due to what doctors said was overeating.