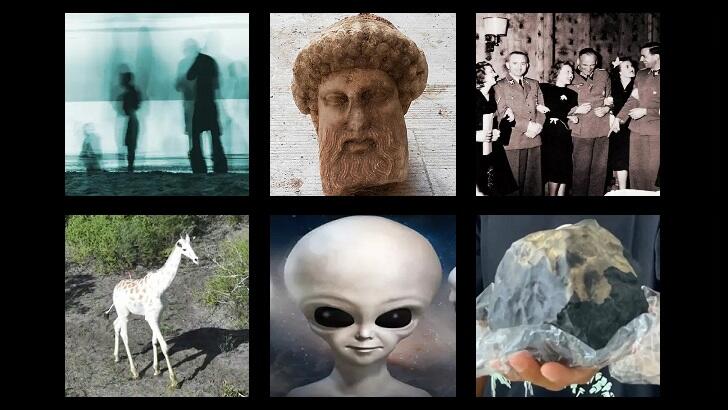 ET contact, disembodied voices, and Nazi wives were among the fascinating topics explored this past week on Coast to Coast AM. And, here at the C2C website, we told you about an albino giraffe outfitted with a GPS tracker, the discovery of what may be a lost work from Leonardo Da Vinci, and an Indonesian man who struck it rich after a multi-million-dollar meteorite crashed through the roof of his house. Check out our round-up of highlights from the past week ... In Coast You Missed It.

The mysterious phenomenon of disembodied voices took center stage on Sunday night's program as author Tim Marczenko detailed his research into this puzzling enigma which has been reported throughout history. He postulated that these curious incidents, which often find a person seemingly hearing their name being called and beckoning them to follow, may be supernatural in nature and could be connected to proverbial 'tricksters' trying to lure their victim into a trap. To that end, Marczenko mused that the phenomenon may be related to cases in which individuals disappear without a trace.

This past week saw a bevy of stories surrounding historical objects being found in surprising locations or under unexpected circumstances. In Greece, a shockingly well-preserved centuries-old bust of the god Hermes was extracted from the sewer system of Athens. Archaeologists in Florida unearthed a shipwreck that had been hidden beneath within a sand dune on a beach since the 19th century. A survey of the bottom of a lake in Lithuania revealed the remains of a medieval soldier complete with his 16th-century weaponry. And, perhaps most momentous, an art scholar in Italy announced that a newfound sketch of Jesus Christ appears to be a lost work from Renaissance master Leonardo Da Vinci.

For as confounding as the UFO phenomenon is, the question of who or what is behind it may be even more bewildering. Spiritual counselor and contactee Sev Tok provided what could be answers to that mystery on Wednesday night's program as she shared insights from communications with what she believes to be extraterrestrial beings known as the Greys. Their reason for visiting the Earth, she reported, is that these aliens were dying off and, in order to save their species, began harvesting human DNA to create a hybrid race that will repopulate the Earth should civilization be destroyed.

In one of those weird quirks of the news cycle, a pair of albino animals from two distinctly different parts of the world made headlines this past week. First, on a wildlife refuge in Kenya, the last known white giraffe was outfitted with a GPS tracker to prevent the incredibly rare creature from poachers after some nefarious individuals killed the only other two such animals earlier this year. Meanwhile, in Wisconsin, a woman caught sight of a wondrous albino buck wandering through her backyard and managed to capture some photographs of the majestic creature before it retreated back into the snowy woods.

While history has remembered and rightly villainized the high-powered Nazis who surrounded Hitler during World War II, the wives of these men of the Third Reich have largely gone ignored. On Saturday night's program, historian and author James Wyllie shed light on these mysterious spouses, revealing that they were not innocent bystanders to the horrors their husbands had committed. He detailed how, much like their partners, these women fell completely under Hitler's spell and, in some cases, were actually more enthusiastic and committed to Nazism than the men they had married.

Easily the most remarkable story of the week came by way of Indonesia, where a modest coffin maker wound up becoming an instant millionaire thanks to an incredible stroke of interstellar luck. Josua Hutagalung was working outside of his home when he heard a sudden crash and, upon rushing over to see what caused the commotion, discovered a rather sizeable rock had inexplicably plummeted from the sky, punched a hole through his roof, and was stuck in the mud outside his house. A subsequent examination of the object led to the shocking determination that it was an incredibly rare meteorite valued at a whopping $1.8 million.