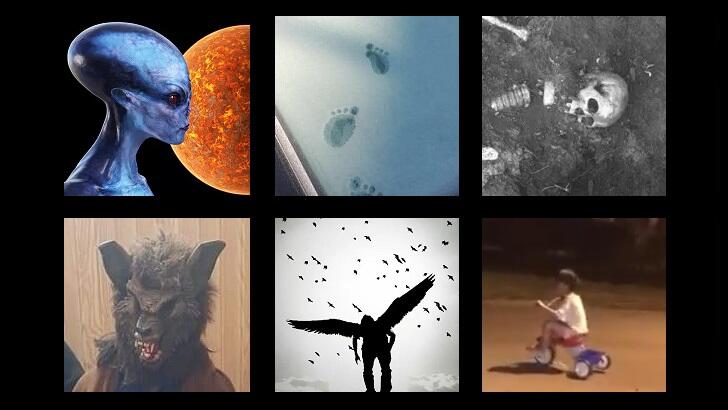 Extraterrestrial races, demonic entities, and the world of forensic science were among the fascinating topics explored this past week on Coast to Coast AM. And, here at the C2C website, we told you about some puzzling footprints that appeared atop a car in England, a 'ghost child' spotted in Malaysia, and a 'werewolf' that was arrested in India. Check out our round-up of highlights from the past week ... In Coast You Missed It.

The removal of negative beings took center stage on Saturday night's program as psychic medium and self-described 'demon seer' June Lundgren talked about her ability to perceive these entities "as they truly are." According to her observations, demons are approximately 7 feet tall and boast a wingspan of 12 feet as well as faded-looking faces that convey deep and profound pain and anger. As one who works to thwart these sinister entities, Lundgren claimed to possess the power to kill a demon should its transgressions be severe enough in the eyes of God.

Potential ghosts and purportedly haunted locations popped up multiple times in the news this past week beginning with an odd story out of South Carolina wherein a group of teens ventured into an abandoned house looking for paranormal activity and wound up discovering a dead body stuffed inside a freezer. Over in India, a curious video from a gas station seemingly showed an apparition briefly appear over the shoulder of an unsuspecting group of me. And, finally, some friends driving around the streets of a city in Malaysia thought that they had spotted a ghost child riding a tricycle at 3 AM, but it turned out that the 'spirit' was a very-alive and quite precocious tot who had slipped out of his house in the dead of night.

While movies and TV programs often depict extraterrestrials as diminutive grey beings with bulbous heads and enormous eyes, accounts from those claiming to have encountered aliens suggest that the appearance of these entities are quite varied. On Thursday night's program, filmmaker Craig Campobasso detailed the vast array of ET types which have been reported by contactees and purported hybrids over the years. Among the various denizens of deep space that he discussed during the program were the classic Greys and Nordics as well as more exotic aliens like mantis-type entities and a group known as the Clarions.

One of the weirder arrests we've seen in a while made headlines this past week in India, where cops busted a young man who was riding around on his bike dressed as a werewolf. As if his strange appearance were not enough to scare people, police say the faux lycanthrope had taken to roaring at frightened bystanders, presumably giving them quite the fright. Upon taking the man into custody, cops released a rather amusing image of the 'captured werewolf' which quickly went viral on social media and spawned something of an unusual debate over whether or not his Halloween mask was within the regulations for preventing the spread of the coronavirus.

In the world of true crime, Dr. Cyril Wecht is something of a household name due to his staggering six decades of work as a forensic scientist who has assisted on a vast array of high-profile cases. On Monday night's program, he recounted some of the most infamous and mysterious deaths that he has been enlisted to look at over the years. Recalling how he was the first forensic pathologist to be given access to JFK's autopsy materials back in 1972, he noted that JFK's brain had been removed during the process which, he theorized, was done to conceal the directions of the bullets which felled the president. During his appearance, Wecht also talked about the JonBenet Ramsey case, the RFK assassination, and why he believes OJ Simpson had an accomplice.

Easily the most puzzling story of the past week came by way of England where a woman woke up one morning and discovered a series of inexplicable four-toed footprints atop her frost-covered car. Alicia Smith shared photos of the very weird markings on social media, expressing bewilderment over what may have created them since the frigid conditions the night before would seem to preclude a barefoot youngster climbing onto her vehicle. This led to some speculation that perhaps they were left behind by a supernatural being akin to an elf, while more skeptical observers posited that they were merely a clever prank.