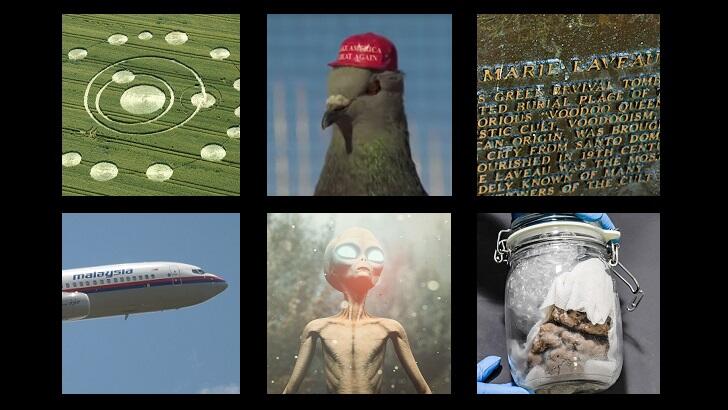 The life and times of Marie Laveau, crop circles, and the possibility that UFOs are time travelers were among the riveting realms explored this past week on Coast to Coast AM. And, here at the C2C website, we told you about pigeons outfitted with MAGA hats, a human brain seized by border patrol agents, and a new twist in the case of missing flight MH370. Check out our round-up of highlights from the past week ... In Coast You Missed It.

Could UFOs visiting the Earth come from the future rather than some other planet? This intriguing scenario was discussed by Diane Tessman on Monday night's program. She argued that the humanoid appearance of ETs, as reported by experiencers, seems to indicate that they have some connection to our own species and, as such, may be time-traveling humans. Tessman theorized that this may also explain why it seems as if UFOs have an interest in our nuclear facilities since their radioactive waste will likely linger in the planet's ecosystem long into the future.

In an unsettling update to a modern mystery, Australia's former prime minister Tony Abbott revealed this week that, shortly after flight MH370 went missing, he was told by Malaysian officials that they considered the incident to be a case of murder-suicide perpetrated by the pilot. Specifically, he said that "it was understood at the highest levels that this was almost certainly" the cause for the aircraft vanishing. Although he was skeptical of any cover-up on the part of the Malaysian government, Abbott expressed concern that the theory may not have been taken into account by search teams looking for the lost airliner.

Thanks their intricate designs and mysterious origins, crop circles are one of the more wondrous phenomena in the world of the paranormal. On Saturday night's program, Janet Ossebaard discussed her research into these enigmatic formations and pointed to "biophysical changes in the plants" as an indication that the designs are not merely the work of human hands. Interestingly, Ossebaard put forward the theory that crop circles are initially created after an 'energy implant' is left in a field by whatever intelligence is behind them and then the formation 'blooms' a few days or even months later.

A very weird trend that has emerged over the last few months involves cases of pigeons being outfitted with hats. Initially seen in Las Vegas back in December and then in Reno after the start of the new year, this week saw a third incident occur which took things to an even stranger level as a self-described 'underground radical group' released a slew of pigeons wearing MAGA hats. Unlike those prior events, in this instance the anonymous organization insisted that the stunt was done in a relatively humane fashion and that the caps were affixed to birds' heads using eyelash glue.

The practice of Creole Voodoo and the life of Marie Laveau were the focus of a fascinating edition of C2C this past Wednesday night by way of an appearance by author Denise Alvarado. She detailed how Laveau, known as the Voodoo Queen of New Orleans, was far from a sinister or spooky individual and, in fact, was a philanthropist who provided aid to countless downtrodden people in her community. That said, Alvarado also talked about one legendary incident in which Laveau is said to have used a curse to exact revenge on an individual who had crossed her.

By far the most bizarre story of the week unfolded at the border of Canada and the United States when officials here in America stopped an incoming mail truck for what should have been a routine inspection. However, when they noticed a package said to contain an 'Antique Teaching Specimen,' officers were curious about its contents and opened up the parcel. Much to their surprise, they discovered that it contained a human brain inside of a glass jar. Since there was no paperwork attached to the odd object, the organ is now in the hands of the CDC, who are investigating the case.