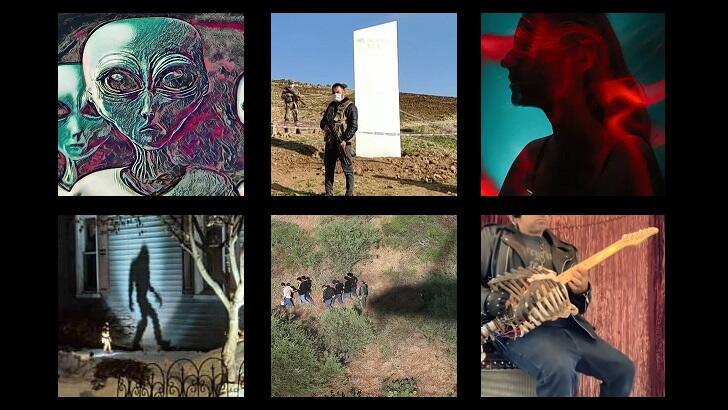 Paranormal tales from the US Border Patrol, insights on a purported Galactic Federation of extraterrestrials, and developing psychic self-defense against energy vampires were among the fascinating topics explored this past week on Coast to Coast AM. And, here at the C2C website, we told you about a 'mystery monolith' in Turkey that turned out to be a publicity stunt, a 'Sasquatch shadow' that fooled police in Pennsylvania, and a heavy metal musician who crafted a guitar out of his uncle's skeleton. Check out our round-up of highlights from the past week ... In Coast You Missed It.

Highly sensitive individuals, known as empaths, and energy vampires took center stage on Monday night's program as Reiki master teacher Lisa Campion talked about her work helping clients strengthen their psychic self-defense. She explained that while being deeply in tune with another person's feelings can be a particularly powerful trait, people possessing an empathic mindset can fall victim to predatory personality types such as narcissists or sociopaths who are always looking for victims. She advised empaths to be aware of their interactions with such 'energy vampires' and to develop boundaries as well as strengthening their proverbial 'field' by envisioning themselves in a protective bubble.

This past week saw a pair of stories centered around police officers encountering what initially seemed to be an unsettling scene, but ultimately turned out to be rather amusing cases of mistaken identity. In Pennsylvania, cops out on a late-night patrol thought they saw the shadow of Sasquatch on the side of a home until they took a closer look and realized it was a well-crafted projection using a spotlight and a Bigfoot statue. Later in the week over in the Netherlands, Amsterdam police passing through a park stopped in their tracks when they spotted what appeared to be a dead body on the ground. Fortunately, their fears proved to be unfounded when they got a closer look at the 'remains' and discovered that it was actually just a too-realistic-looking snowman.

Often working in isolation and at odd hours of the night, law enforcement officers occasionally encounter high strangeness by virtue of the unique nature of their vocation. On Sunday night's program, retired US Border Patrol agent Rocky Elmore shared eerie accounts of paranormal events that he and his colleagues experienced during his twenty years of service. He recounted seeing what appeared to the ghost of a fellow agent who had recently passed away and a truly chilling incident in which he and a group of trainees were seemingly stalked by a mysterious bipedal entity that was only visible by way of a thermal imaging scope.

In what we can only imagine was a very odd coincidence, this past week saw two separate countries fool their citizens by way of elaborate hoaxes that ultimately were revealed to be creative celebrations of their respective space programs. First, in the United Arab Emirates, two Martian moons were projected over the city of Dubai, sparking something of a UFO panic until it was revealed to be the elaborate stunt aimed at generating excitement about the country's Hope Probe spacecraft, which was set to arrive in the atmosphere of the Red Planet a few days later. Meanwhile, in Turkey, a new 'mystery monolith' had people wondering if the weird 2020 fad was making a comeback until the Turkish government took credit for the piece at a press conference announcing their new space program.

Claiming to be a sitting member of a Galactic Federation of extraterrestrials, channeling medium Christopher Macklin shared insights into this purported consortium of aliens on Wednesday night's program. He explained that the group was formed eons ago with the purpose of keeping watch over the three-dimensional world and protects our planet from negative races of ETs such as the Reptilians and the Anunnaki. Macklin also detailed how his ability to communicate with various races of extraterrestrials has allowed him to develop healing methods involving balancing the body's energy fields.

Easily the weirdest story of the week came by way of Florida, where a heavy metal musician fashioned a guitar out of his late uncle's skeleton. The colorful rocker, who goes by the name 'Prince Midnight,' acquired his loved one's bones after the medical school in Greece, where they had been used for educational purposes for decades, decided that they no longer needed the professionally preserved remains. After going through all manner of red tape to have the skeleton sent to America, the musician wasn't quite sure what to do with it until he fondly remembered how his uncle introduced him to heavy metal music. This led Prince Midnight to fuse the man's spine and rib cage with a Fender Telecaster guitar to create the 'Skelecaster,' an actual working and undeniably macabre instrument.