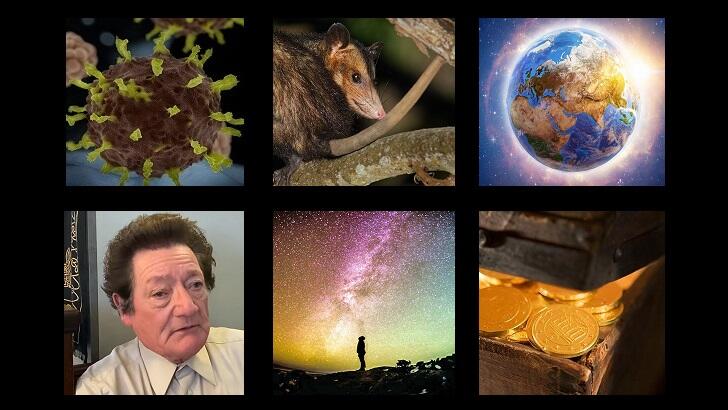 Decoding dreams, Nostradamus and the coronavirus, and geoengineering were among the fascinating topics discussed this past week on Coast to Coast AM. And, here at the C2C website, we told you about a pair of very odd Bigfoot stories, a Colorado man who died in pursuit of Forrest Fenn's treasure, and a curious mystery surrounding severed possum tails in Australia. Check out our round-up of highlights from the past week ... In Coast You Missed It.

Deciphering the meaning of dreams has been a fascination of the human species for time immemorial. On Wednesday night's program, Layne Dalfen shared insights into how to interpret these mysterious experiences and possibly unlock messages contained within them. She mused that a dream is a conversation that one is having with themselves and indicated that identifying 'points of interest,' such as feelings sparked from the experience and significant images, can help in decoding the overall message contained within these enigmatic visions.

The infamous Forrest Fenn treasure wound up generating another round of controversy this past week when it was revealed that a Colorado man had recently died while searching for the eccentric author's hidden cache of riches. Michael Wayne Sexson became the fifth person to perish in pursuit of the prize when he made an ill-equipped journey into the wilderness looking for the location of the treasure and wound up dying after getting lost in the woods. The tragic turn of events will likely renew calls for Fenn to end the treasure hunt, which is something the author has refused to do in the past.

The coronavirus understandably continued to be a significant topic of conversation this past week on Coast to Coast AM with several programs offering different perspectives on the pandemic. Experiencer Jason Quitt discussed how to deal with the realities of the crisis on Saturday night's program and legendary comedian Dave Foley joined George Knapp to take calls concerning the situation on Sunday night's show. Additionally, Nostradamus expert John Hogue appeared on Thursday night's program to respond to claims circulating online that the famed clairvoyant predicted the pandemic.

Bigfoot popped up in the news this past week by way of a pair of decidedly different but equally compelling videos. First, a man in North Carolina was left visibly shaken after allegedly encountering a Sasquatch. The unnerved witness provided a riveting video recollection of the incident just a few minutes after it happened and was clearly still struggling with what he had just experienced. Meanwhile, in California, a county supervisor board meeting took a strange turn when members spent a considerable amount of time debating whether or not to pass a resolution aimed at protecting Bigfoot.

While geoengineering and weather manipulation have long been relegated to the realm of conspiracy theory, there are genuine projects underway to use these techniques to help fight global warming. On Tuesday night's program, journalist Thomas M. Kostigen detailed various methods that scientists around the world are using to try and fight climate change, such as solar engineering and literally pulling carbon out of the air. He also dismissed chemtrails, citing the lack of scientific papers on the subject, and talked about an artificial tree that may capture carbon at a million times the rate of a regular tree.

One of the weirder stories we've seen in a while occurred this past week down in Australia, where a county was gripped by a bizarre mystery in which drivers reported spotting thousands of severed possum tails littering long stretches of road. The puzzling phenomenon sparked all manner of theories online as to what could have been the source of the curious limbs. Making the story all the more strange is that this exact same thing took place in the region back in 2015 and then, as with this most recent case, the source of the tails was never determined.