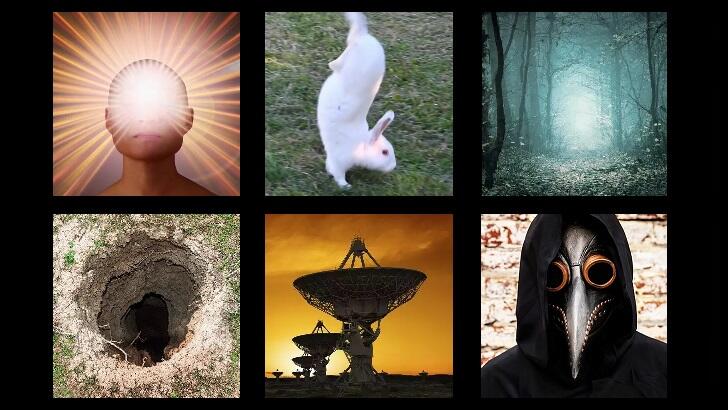 An alternative take on Bigfoot, the search for extraterrestrial intelligence, and communicating with the 'other side' were among the riveting realms explored this past week on Coast to Coast AM. And, here at the C2C website, we told you about plague doctors appearing throughout the United Kingdom, a pair of disastrous treasure hunts, and a bizarre breed of rabbit that walks on its front legs. Check out our round-up of highlights from the past week ... In Coast You Missed It.

As we've come to learn over the years on Coast to Coast AM, those who communicate with the 'other side' can come from all manner of backgrounds and, in turn, apply their gifts in a variety of unique circumstances. This was exemplified on Monday night's program as decorated combat veteran Dean McMurray detailed how he uses his psychic abilities as well as clairsentient intuition to help veterans with PTSD as well as Gold Star families. Known as the 'Military Medium,' he recounted how vets often feel more comfortable working with him due to their shared background in the Armed Forces and shared a remarkable story wherein a clairaudient perception may have saved his life when he was stationed in Afghanistan.

This past week brought news of a bizarre and somewhat worrisome trend unfolding in the UK as people wearing plague doctor costumes keep popping up in various communities and, understandably, causing residents to be rather unsettled. The odd fad began late last month in Scotland where an individual dressed in the haunting garb caused something of a stir until police determined that the mysterious stranger was a mischievous teenager who was promptly given a stern lecture by the authorities. However, the case seemed to open the proverbial floodgates as plague doctors were either seen or rumored to have been spotted in at least five communities throughout England and Scotland.

Rather than being a flesh and blood creature, could Bigfoot be some kind of paraphysical phenomenon? On Saturday night's program, authors Joshua Cutchin and Timothy Renner explored this tantalizing question and argued that inexplicable aspects of Sasquatch accounts would seem to suggest that the famed cryptid could be more paranormal in nature. Specifically, they cited reports of glowing eyes which is an attribute that a primate would not possess. Additionally, they pointed to tales of Bigfoot vanishing into thin air and impervious to gunfire as well as stories of puzzling light activity associated with a Sasquatch sighting.

Two treasure hunts that each went terribly awry made headlines this past week, beginning with an incident in India where a family had spent the last six months digging a massive pit in their backyard after being told by a sorcerer that untold riches could be found there. The excavation took a tragic turn, however, when two individuals descended into the hole and wound up perishing after they were exposed to poisonous gas. Meanwhile, here in America, a Utah man was sentenced to six months in prison after authorities at Yellowstone Park determined that he had dug a staggering seventeen holes at the site while looking for the infamous Forrest Fenn treasure.

The search for extraterrestrial intelligence took center stage on Wednesday night's program as Seth Shostak, senior astronomer at SETI, returned to the show to discuss the latest happenings in the longstanding quest to determine if we are 'not alone.' Regarding the theory that interstellar object 'Oumuamua could have been alien in nature, he conceded that the theory was fascinating to consider, but ultimately posited that it probably had a more prosaic explanation. Shostak also talked about a curious signal picked up by the Breakthrough Listen project that probably had a terrestrial origin as well as projects aimed at sending messages into space in the hopes of reaching ETs.

In a testament to how modern science can be used to solve long-standing mysteries, a team of genetic researchers announced this week that they had determined why a unique breed of rabbit in France walked on its front feet instead of hopping. Known as 'sauteur d’Alfort,' the domesticated species had puzzled experts since first being discovered in the 1930s, but the cause of its jaw-dropping method of locomotion had been indecipherable until now. By breeding one of the 'bipedal' bunnies with a more traditional species of rabbit, geneticists were able to identify a mutation that causes a malfunction in the muscles the creature normally would use to hop, which led to the animals naturally adapting to the condition and developing the wondrous walking style.