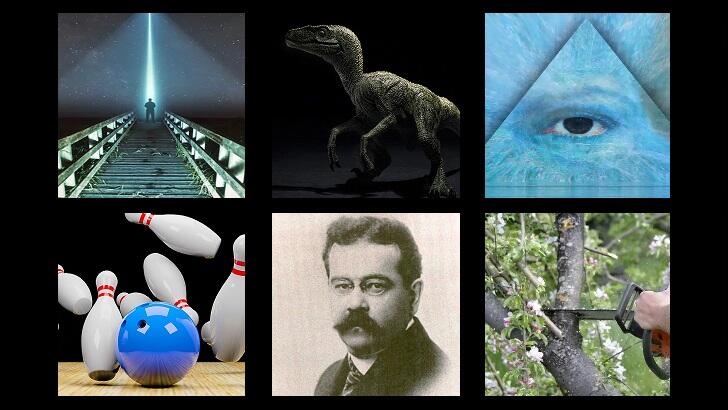 Anomalous experiences, paranormal pioneers, and the mysterious dream world were among the fascinating realms explored this past week on Coast to Coast AM. And, here at the C2C website, we told you about a phantom lumberjack on a reign of terror in England, an eerie dashcam video from Australia that may show a ghost child, and a bowler who threw a perfect game using a ball containing his late father's ashes. Check out our round-up of highlights from the past week ... In Coast You Missed It.

Over the course of paranormal history, there have been a number of groundbreaking figures who forever changed their respective fields by virtue of their pioneering work. On Tuesday night's program, author Mitch Horowitz talked about these proverbial game-changers from the worlds of UFO studies, psychical research, and the occult. Among the important voices that he highlighted during the evening were British scientist Frederic Myers, who cataloged hundreds of apparition accounts back in 1901, and Manly P. Hall, who penned the highly influential esoteric tome The Secret Teachings of All Ages. Other figures discussed by Horowitz during his appearance included Jacques Vallee and Charles Fort as well as JB and Louisa Rhine.

This past week saw a pair of puzzling videos make news and leave viewers scratching their heads. First, in Florida, a homeowner could not believe her eyes when her home security system captured video of a mysterious creature that seemed to resemble a baby dinosaur dashing through her yard. Meanwhile, down in Australia, a motorist cruising down the highway was shaken when he nearly hit what appeared to be a small child in the middle of the road. The unsettling incident, which was filmed by his dashcam, took a strange turn when it was revealed that police were informed of the near-miss and spent hours searching for the tot, but found no trace of the child, leading some to suspect that it could have been a ghost.

Encounters with extraterrestrials and the unexplained took center stage on Sunday night's program as Kirsten Blackburn, Jay King, and Stuart Davis discussed their online collective known as The Experiencer Group. They explained that the endeavor aims to provide "the ultimate sanctuary" for people who have had dealings with high strangeness by offering a safe and welcoming outlet for individuals to share their stories. During their appearance, they shared a number of accounts from group members who have had a variety of anomalous encounters and Davis also recounted his own personal paranormal experiences, including being visited by a giant mantis-like creature.

In a heartwarming story that popped up in the news this past week, a bowler in Illinois threw a perfect game using a ball that contained the ashes of his late father. The remarkable feat was accomplished by John Hinkle, who uses a two-handed playing style which requires that his bowling ball have no finger holes. In order to adhere to the rules of the sport as well as honor his dad, who introduced him to bowling and passed away a few years ago, he had one of the space filled in with the ashes of his father. Amazingly, the perfect game was actually the first time Hinkle had ever used the tribute ball.

One of the more mysterious human experiences shared by everyone around the world is that of dreaming. On Monday night's program, author and hypnotherapist Kelly Sullivan Walden discussed this enigmatic sleep state and how it can be used to process stresses and challenges that trouble us in our waking life. She pointed to precognitive dreams as an indication that these moments are far more complex than we may realize. During her appearance, Walden also recounted her near-death experience wherein she entered a parallel plane and experienced a profound sense of clarity and lightness.

A particularly weird crime spree currently unfolding in England features a 'phantom lumberjack' who is believed to be responsible for cutting down a staggering 48 trees in a group of neighboring communities over the last month. Dubbed 'Jack the Chipper' by some residents, the ne'er-do-well had somehow managed to evade capture despite an increase in police patrols and an informed public on the lookout for the miscreant. Operating under the cloak of darkness and apparently using a near-silent battery-operated chainsaw, the mysterious troublemaker appears to have no motive as they simply slice through trees and leave the severed limbs behind as a chilling calling card.