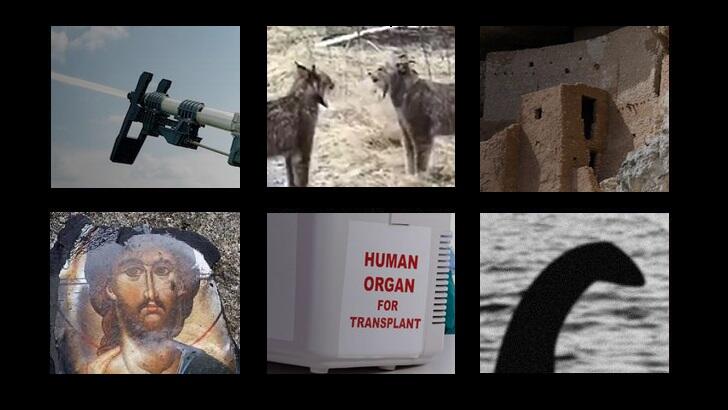 From the lost treasure of Montezuma and the unnerving world of underground human organ trade to Nessie being hunted by DNA-seekers and an infamous conspiracy theory seemingly being pronounced dead, it was another whirlwind week of weird here at Coast to Coast AM. Before you head on for the long holiday weekend, check out our proverbial potato salad of strangeness that we like to call ... In Coast You Missed It.

Although often relegated to the realm of urban legend, the underground market for human organs is an unsettling and all-too-real world of trade. On Saturday night's program, investigative journalist Scott Carney shared chilling insights into body part trafficking, including jaw-dropping stories of skeletons being procured by horrific means and exported by the thousands from the Indian city of Calcutta. The nightmare-inducing accounts are almost enough to give a second thought to those old tales of tourists waking up in a bathtub without their kidney.

This past week was a particularly newsworthy one for the iconic creature known as the Loch Ness Monster as Nessie popped up in a pair of stories. First, a schoolgirl visiting the legendary site with her grandmother managed to film something inexplicably shiny seemingly surfacing on the water. We're still not quite sure what they spotted, but it's undoubtedly strange. Meanwhile, on the scientific front, the long-awaited environment DNA project aimed at cataloging all of the species in Loch Ness is finally set to begin and just may solve the mystery of Nessie once and for all.

On a somewhat similar note, a longstanding conspiracy theory that has been explored at length by researchers for decades may have been debunked by a new study. French researchers announced that they had been granted unprecedented access by the Russian government to Adolf Hitler's remains and subjected them to rigorous testing. Their conclusion was that the notorious Nazi leader did, indeed, die in his Berlin bunker in 1945 and did not escape to the many exotic locations, the Antarctica or Argentina, rumored to have harbored him after the war.

There are few things more tantalizing to the imagination than the prospect of a lost treasure. One of the more legendary hordes, discussed by self-described 'ancient artifacts buff' Paul Rimmasch on Monday's show, is that of Montezuma's treasure which is said to have been hidden by the Aztec ruler during the Spanish conquest of Mexico. Forbidden archaeology found itself front and center again on Tuesday night, when acclaimed researcher Michael Cremo provided an update on his exploration of the subject, covering a vast array of topics such as the hidden history of the human race, the Silurian Hypothesis, and Vedic cosmology.

When one looks to the way weather has been getting increasingly weird, the possibility that it's not all the doing of Mother Nature can't help but be questioned. That was the case made by activist Dane Wigington on Wednesday's program as he detailed his research into geoengineering or, to put it more bluntly, weather modification. Citing an array of examples, Wigington not only explained the various methods possibly being used to manipulate the weather, but also explored the more worrisome questions of who might be doing it and why.

Another odd phenomenon that has raised eyebrows in recent years are 'mystery booms' and part of Pennsylvania have become the latest region of the country to be inflicted by the maddening sounds. The case, which has been unfolding since April, has left local law enforcement officials flummoxed and residents irritated as they have been continually woken up at night by a thunderous blasting sound that rocks their homes. At their wits end over the ongoing series of incidents, authorities have now turned to the FBI in the hopes of restoring some sweet silence to the Keystone State.