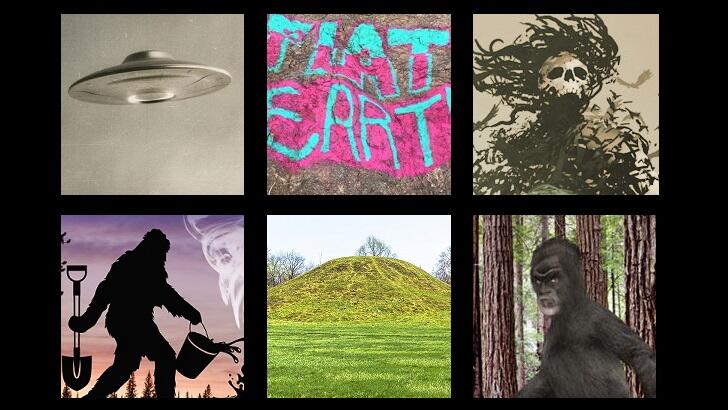 Ancient mysteries in America, a curious creature known as the 'Big Muddy Monster,' and the always-intriguing UFO phenomenon were among the fascinating topics discussed this past week on Coast to Coast AM. And, here at the C2C website, we told you about a pair of Bigfoot sightings in Georgia, a Flat Earth fan running afoul of the law, and this year's installment of the infamous Bilderberg Meeting. Check out our round-up of highlights from the past week ... In Coast You Missed It.

While not always the case, it often seems like every small locality in America boasts some kind of mysterious creature that has captivated residents for decades. On Wednesday night's program, paranormal researcher Chad Lewis detailed one such entity known as the 'Big Muddy Monster.' Said to lurk around southern Illinois, the Bigfoot-like beast reportedly stood nearly seven feet tall, sported mud-covered white fur, and emitted an unbearable stench. Lewis also discussed the infamous Van Meter Visitor, a bizarre winged entity that terrorized a small town in Iowa.

The peculiar and the police crossed paths this week in a pair of odd stories. In Arizona, authorities arrested a man for allegedly going on an epic graffiti spree in which he spray-painted messages about the Flat Earth on at least 30 different places on federal land. The conspiracy theorist is currently facing felony vandalism charges. A troublemaking teen in Indonesia was considerably more lucky as he received only a stern reprimand after cops busted him dressing up as a ghost and scaring motorists from the side of the road.

There's no hotter topic in the world of the paranormal right now than UFOs and Sunday night's program featured a trio of fascinating guests discussing the phenomenon. First, former head of the Advanced Aerospace Threat Identification Program, Luis Elizondo previewed the highly anticipated forthcoming television series Unidentified. Then, legendary UFO researcher Jacques Vallee shared his thoughts on the phenomenon based on decades of work looking at the enigma. And, finally, Col. John Alexander his longstanding interest in UFOs and his attempts to get the government to fund research into these anomalies.

The iconic cryptid Bigfoot popped up in the news this past week by way of two stories literally from coast to coast. Early in the week, word out of Georgia was that the elusive creature had been spotted not once, but twice in the last week. Both encounters with the Sasquatch came from shaken eyewitnesses who described seeing a massive, hairy, bipedal beast while they were driving through a remote part of northern Georgia. On the other side of the country, fire officials in Oregon unveiled an awesome new safety campaign starring Sasquatch.

Ancient mysteries here in America were the topic of discussion on a pair of programs this past week. On the Monday edition of Coast, forensic geologist Scott Wolter talked about the enigmas explored on his TV series America Unearthed, including the Kensington rune and evidence of Viking relics in Arizona. Then, on Thursday night's program, L.A. Marzulli discussed his research into massive mounds found throughout North America and theorized that these mysterious sites may have been constructed by non-human entities like the Nephilim.

One of the biggest events of the year is taking place this weekend, but you're unlikely to hear much about it on the news: the annual Bilderberg Meeting. The secretive gathering of global power brokers is being held in Montreux, Switzerland and features a bevy of industry leaders from the world of finance, industry, media, and politics. Among the noteworthy names expected to be in attendance this year are Jared Kushner and Secretary of State Mike Pompeo. Although the details of what gets discussed at the meeting will never be revealed to the public, topics set for this year's event include AI, the weaponization of social media, and the importance of space.