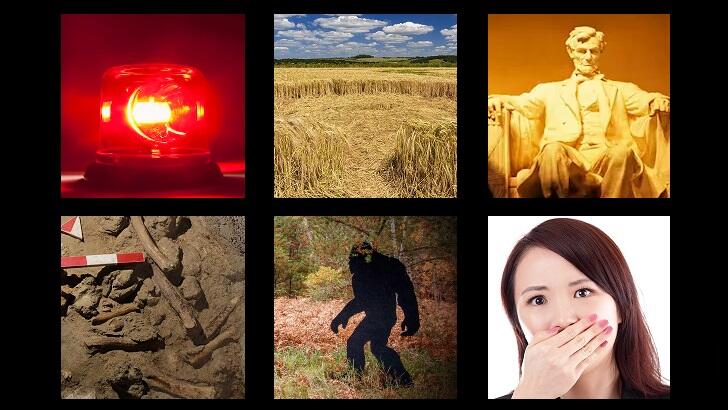 Bigfoot, haunted prisons, and anomalous events involving Abraham Lincoln were among the fascinating topics explored this past week on Coast to Coast AM. And, here at the C2C website, we told you about a bevy of Neanderthal bodies discovered in Italy, a case of 'foreign accept syndrome' out of Australia, and the first crop circle of 2021. Check out our round-up of highlights from the past week ... In Coast You Missed It.

When one considers the creepiest places that could be haunted, prisons would undoubtedly occupy a top spot on that chilling list. On Wednesday night's program, author David Weatherly and paranormal researcher Ross Allison detailed their research into such unnerving locations. They observed that older prisons were often built out of limestone, which some believe is particularly conducive to paranormal activity. During their appearance, the duo shared stories about spooky sites like Holmsburg Prison in Pennsylvania, Moundsville Prison in West Virginia, and, of course, the infamous Alcatraz.

This past week featured something of a paranormal milestone as the first crop circle of 2021 was found in the United Kingdom. Embossed into a field of rapeseed in the village of Stanton St Bernard, the curious formation consists of a series of triangles that some observers have likened to an origami pinwheel. Officially marking the start of crop circle season in the United Kingdom, the design is undoubtedly the first of several strange and mysterious formations which will appear throughout the world over the next few weeks and months, raising the seemingly age-old question of whether they were made by humans or visitors from another world.

Anomalies surrounding Abraham Lincoln took center stage on Saturday night's program as author Paul DeBole discussed curious details of the 16th president's time in office and his assassination. He noted a particularly eerie irony in that just prior to leaving for Ford's Theater, where he met his untimely end, Lincoln actually signed into law the bill that established the Secret Service. DeBole also reflected on how brazen and foolhardy John Wilkes Booth's assassination plot had been as he only possessed one shot in his gun and there were four people in the president's box that night.

In what has been hailed as an "extraordinary discovery," archaeologists in Italy unearthed the fossilized remains of a whopping nine Neanderthals that met a particularly gruesome fate thousands of years ago. The remarkable specimens were found in a cave that had been sealed off from the world following a landslide 60,000 years ago. According to researchers who have examined gnaw marks on the bones, it is believed that the unfortunate Neanderthals had actually been preyed upon by a pack of hyenas that dragged them into the cavern which served as their den.

While the decades-long search for Sasquatch has yet to yield definitive proof of the creature's existence, the legendary cryptid continues to fascinate and bewilder paranormal enthusiasts and the public. On Monday night's program, Kenney Irish and Russell Acord talked about various theories regarding Bigfoot which have been put forward over the years. The pair posited that Sasquatch is probably a physical being, but conceded that some cases indicate an interdimensional aspect to the creature. They also addressed the possibility of Bigfoot being connected to UFOs or perhaps that it inhabits subterranean realms.

One of the weirder stories we've seen in a while came to us this week by way of Australia, where a woman recovering from tonsil surgery discovered that she had inexplicably acquired an Irish accent. Angie Yen could not believe her ears when she woke up 10 days after the seemingly routine operation and noticed that her voice did not sound quite the same. Eventually, it was determined that her Australian accent had transformed overnight into the speaking style of someone from Ireland. Although not diagnosed by doctors yet, Yen understandably believes that she developed the rare but very real condition known as ''foreign accent syndrome.'