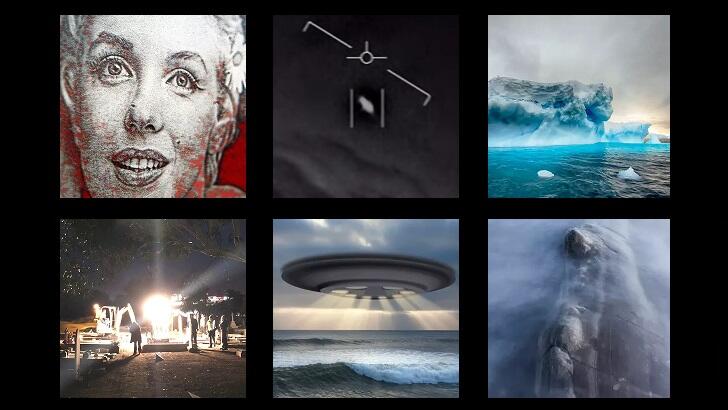 UFO disclosure, the mysterious death of Marilyn Monroe, and secrets of Antarctica were among the fascinating realms explored this past week on Coast to Coast AM. And, here at the C2C website, we told you about an underwater expedition to possibly locate the legendary lost Amber Room, UFOs being featured on 60 Minutes, and the remains of a mysterious creature found at the bottom of the Mediterranean Sea. Check out our round-up of highlights from the past week ... In Coast You Missed It.

The mysterious death of Marilyn Monroe has long interested conspiracy theorists who contend that the iconic actress did not commit suicide by way of an overdose, but was actually murdered by nefarious forces. On Sunday night's program, author Nick Redfern discussed some of the more curious aspects of the case. He noted that a CIA document from the 1950s that actually detailed how to kill someone without revealing that they were murdered. Redfern also addressed longstanding rumors that Monroe had some kind of inside information regarding either UFOs or the JFK assassination that ultimately led to her being taken out by the 'powers that be.'

The UFO phenomenon captured the public's imagination in a major way this past week following a blockbuster segment on the venerable news program 60 Minutes. The remarkable feature centered around Navy pilots reporting unidentified aerial phenomena and how the government has begun to take this matter seriously. As one might imagine, the segment spawned a slew of responses from pundits in the media with many marveling at this strange turn of events. Shortly thereafter, former President Barack Obama added fuel to the fire when he responded to a question about UFOs by giving credence to the seriousness of the situation and noted that "we don't know exactly what they are."

By nature of its remote location and icy terrain, Antarctica is one of the more mysterious locations on the planet and a place that just might be hiding secrets yet to be discovered. On Saturday night's program, author Brad Olsen talked about his research into the frosty continent and claimed that there are three massive crafts that have only just started to be revealed due to thawing ice. He postulated that the Nazis' interest in Antarctica may have been due to their knowledge of those vehicles and a desire to acquire whatever advanced technology the vessels still possessed. Olson also noted a number of intriguing anomalies that have been spotted on the continent by way of Google Earth.

Mysterious aquatic creatures had something of a moment this week by way of several stories that popped up in the news, beginning with a curious piece of underwater footage posted online by a paranormal researcher. The video, said to have been recorded by a remote-controlled vessel surveying the floor of the Mediterranean Sea, showed the lengthy skeleton of an unknown animal which some have speculated is a heretofore undiscovered sea serpent. In North Carolina, wildlife experts were left scratching their heads when an odd blob was found on a beach and a $50,000 reward was issued to anyone who could prove the existence of a 'lake monster' said to lurk in Minnesota's Lake Pepin.

Over the last few years, UFO enthusiasts have grown increasingly optimistic that some kind of official government disclosure regarding the phenomenon will occur in the not too distant future. On Wednesday night's program, longtime advocate for such a scenario, Stephen Bassett, shared his thoughts on what the future might hold when it comes to this still-unfolding story. He suggested that the forthcoming Pentagon report on unidentified aerial phenomena will lead to Congressional hearings on UFOs, specifically centered around national security. In turn, he projected, the president will be in a position to reveal the truth about extraterrestrials to a public that is now ready for such Earth-shattering news.

This past week saw news that a pair of longstanding mysteries may soon finally be solved. First, a team of divers announced plans to conduct an expedition to a sunken Nazi steamer ship off the coast of Poland where, they suspect, the legendary lost Amber Room might be located. Based on curious crates observed in the wreckage, experts consider the downed vessel to be a strong candidate for the final resting place of the ornate gold and amber paneling that was stolen from a Russian palace during WWII and subsequently vanished at the close of the war. Meanwhile, down in Australia, authorities exhumed the body of the mysterious 'Somerton Man,' an individual who was found dead on a beach in 1948 and has never been identified despite scores of researchers attempting to solve the case. The hope is that new forensic analysis of the remains will yield DNA insights to close the case once and for all.