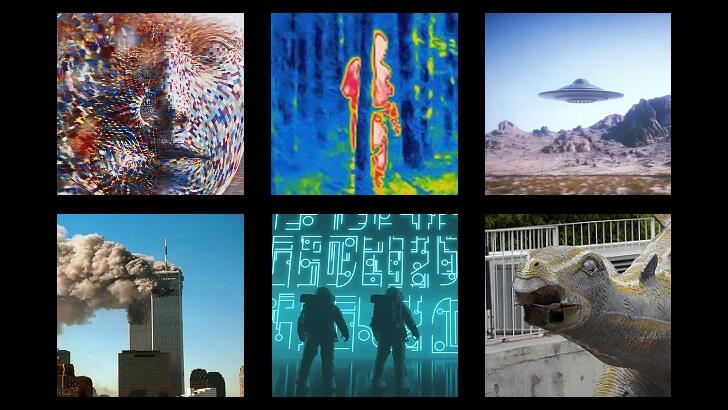 The UFO phenomenon, ancient aliens, and deja vu were among the fascinating topics explored this past week on Coast to Coast AM. And, here at the C2C website, we told you about thermal images that may show Australia's Bigfoot, a 9/11-themed restaurant in Texas, and an unfortunate man in Spain who perished when he got stuck inside a dinosaur statue. Check out our round-up of highlights from the past week ... In Coast You Missed It.

One intriguing hypothesis long discussed among paranormal researchers is the possibility that extraterrestrials once visited the Earth in the distant past. On Tuesday night's program, researcher Steve Quayle presented his findings from an 18-month-long archaeological dig that he conducted in Mexico in search of evidence for just such a scenario. Calling what he unearthed "the most important archaeological find in history," he revealed the discovery of a slew of artifacts that would appear to indicate that the Aztecs were in contact with ETs. Quayle argued that his research, which will soon be unveiled in full at a press conference, would upend our understanding of human history.

This past week saw an intriguing new development in the search for Australia's version of Bigfoot, known as the Yowie, as researchers Down Under revealed a series of thermal images that, they contend, show the elusive cryptid hiding behind some trees. The potential evidence seemingly shows the heat signature of a nine-foot-tall creature that had been silently lurking near a group looking for the elusive beast in one of the country's state forests. Given the promising results of their expedition, the team may wish to consider venturing up to Oklahoma where it was announced this week that the controversial bounty on Bigfoot has now ballooned to $3 million.

The UFOs were a hot topic of conversation this week on Coast to Coast AM with multiple programs devoted to discussing different aspects of the mysterious phenomenon. First, on Sunday night's program, filmmakers Laura and Erik Rowton detailed an intriguing 2016 case from Wales wherein a massive pyramid-shaped object was seen hovering over a village. Then, on Monday night's show, author David Sereda talked about the forthcoming government report on unidentified aerial phenomena and whether or not it might result in revelations concerning aliens. And, on Wednesday night's program, historian Richard Dolan shared his thoughts on the latest news on UFOs and disclosure.

One of the more unsettling stories we've seen in a while occurred this past week in Spain where the body of a missing man was discovered inside of a stegosaurus statue. Authorities believe that the unfortunate individual had somehow lost his cellphone inside the piece and made the ill-advised decision to climb into the faux dinosaur to retrieve it. Sadly, that is when tragedy struck, as the man wound up stuck upside down in one of the statue's legs, where he perished. The man, who was subsequently reported missing by his family a few days later, was eventually discovered by a father and son who were playing near the piece.

Deja vu took center stage on Thursday night's program as 'Paranormal Professor' Bruce Olav Solheim discussed his research into the curious phenomenon of feeling as if you're experiencing something for the second time. He noted that reports of deja vu date back to antiquity and that a staggering 70% of the population report having the experience at least once in their life. Musing that some incidents of the phenomenon appear to be paranormal in nature, Solheim recounted having a precognitive nightmare about an active shooter at the school where he teaches and then seeing the event play out in real life the following day.

Easily the weirdest story of the week came by way of Texas, where a bar owner found himself at the center of controversy after it was discovered that he had rebranded his establishment with a 9/11 theme. Brent Johnson had actually enacted the strange makeover back in 2013 in what he says is an effort to ensure that people never forget that fateful day. The curious concept, which includes pictures of the burning Twin Towers displayed on the restaurant's walls, largely went unnoticed until a local resident posted pictures of 'Bar9Eleven' to Twitter, setting off a firestorm of criticism from astounded social media users who argued that, regardless of his intent, the idea is in incredibly bad taste.