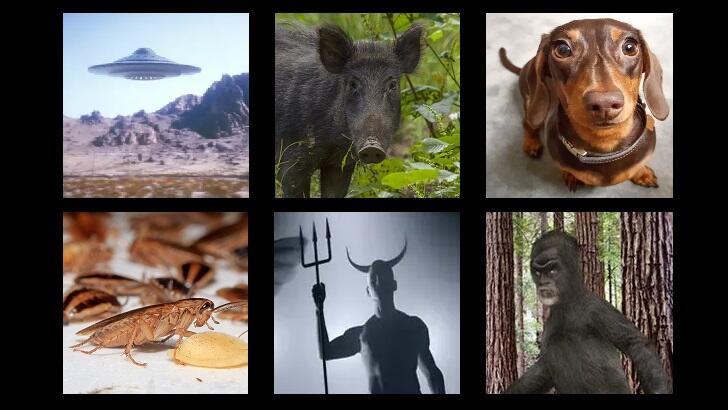 Demons masquerading as ETs, ancient alien abductions, and fantastic miracles performed by dogs were among the fascinating realms explored on Coast to Coast AM this past week. And, here at the C2C website, we told you about a 'shapeshifting boar demon,' a cockroach attack at a restaurant in Thailand, and a possible Bigfoot video from Oregon. Check out our round-up of highlights from the past week ... In Coast You Missed It.

While alleged alien contact and abductions may appear to be a relatively modern phenomenon, the historical record would seem to suggest that might not be the case. On Sunday night's program, researcher Paul Anthony Wallis postulated that the written records of countries around the world boast similar accounts of visits by otherworldly beings. These entities, he mused, may be described as Gods, but behave more in a manner one might expect from extraterrestrials coming here from somewhere out in the cosmos. Observing that we seem to be on the cusp of some kind of UFO disclosure, Wallis argued that revelations regarding the origin of alien visitors may wind up explaining ancient tales of visitors from the Pleiades, Sirius, and Orion star systems.

This past week saw a pair of videos possibly showing paranormal phenomena pop up online, beginning with an eerie piece of security camera footage from a pub in England. In the spooky scene, a pair of seemingly connected orbs can be seen lingering around an outdoor beer garden. Workers at the establishment suspect that the inexplicable anomalies, which were nowhere to be found when the owner went to investigate the situation, could have been a ghost. Meanwhile, in Oregon, a Sasquatch enthusiast posted a video online which, he believes, shows the face of a Bigfoot watching him while he was out on a hike.

One of the more worrisome theories regarding UFOs and whatever may be behind them is they are actually a sinister ruse being perpetrated by demonic forces. Biblical scholar Scott Mitchell explored this troubling idea on Thursday night's program, arguing that what witnesses perceived to be aliens are, in fact, fallen angels. He warned of a scenario in which it appears that extraterrestrials have arrived on Earth and they are greeted as saviors, only for them to later be revealed as an evil invading force working at the behest of Satan. Mitchell also posited that there are powerful individuals on the planet who are aware of the 'true nature' of the aliens and are, sadly, in league with them in their goal of taking over the planet.

In a wild story out of Thailand this week, a financial dispute between a restaurant owner and a criminal gang culminated with a pair of ne'er-do-wells bursting into the establishment and releasing over 1,000 cockroaches as diners looked on in horror. Oddly enough, the bizarre bug attack occurred at 'G House Tapei' on Monday evening as they were hosting a massive gathering of police officers, including the city's commissioner. While one might think the miscreants purposely chose to unleash the insects at the event, it turns out that they actually just had incredibly poor timing and, as such, are now being pursued by a police department that is understandably quite unhappy about their gathering being ruined by the caper.

As we've come to learn over the years, miraculous moments can take many forms and, on Tuesday night's program, bestselling author SQuire Rushnell detailed a particularly heartwarming type of intervention: amazing incidents wherein dogs saved the proverbial day. He noted that these cases are so wondrous that they seem to go beyond mere coincidence and seem to indicate some kind of divine origin. Rushnell shared one such story wherein a police canine located a lost boy and it was later discovered that, unbeknownst to her, the child's mother had actually raised the dog when it was younger. Other tales included accounts of canines alerting parents that their babies were in peril and detecting cancer in people before doctors noticed it.

By far the oddest story of the past week came by way of Indonesia, where a village was gripped by a strange hysteria due to rumors that there was a 'shapeshifting boar demon' stealing money from people. Known locally as a 'babi ngepet,' this entity is said to be the result of an individual harnessing black magic to turn themselves into a pig that can procure riches by nefarious means. After numerous residents found themselves inexplicably out of pocket, concerns that they were being victimized by the mystical creature reached such a fevered pitch that a posse of villagers actually hunted down a boar and beheaded the unfortunate animal in the hopes of putting an end to the demon's proverbial crime spree.