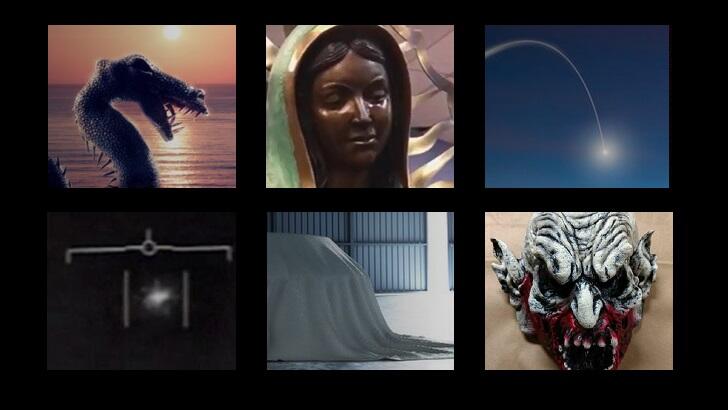 This past week was packed with fascinating topics discussed on Coast to Coast AM, including the fight for UFO disclosure and tales of Nessie on land, as well as strange and unusual stories featured here at the C2C website, like the 'weeping' Virgin Mary statue of New Mexico and the psychic who claims she can smell death. Check out weekly round-up of C2C highlights ... In Coast You Missed It.

Stephen Bassett, a tireless advocate for UFO disclosure, discussed how 2018 has been a particularly promising year when it comes to ending what he sees as a government-imposed embargo on the truth about the phenomenon. Dismissing SETI programs as merely a public relations effort rather than a genuine scientific endeavor, Bassett was highly enthusiastic about the work being done by the To The Stars Academy group. To that end, he marveled that the organization's accomplishments so far constitute "probably the most amazing development in the history of the truth embargo since Roswell."

On a related note, news emerged during the week of a bombshell report by the military concerning the now-infamous 2004 Nimitz 'Tic Tac' UFO encounter by US Navy pilots which received considerable attention after being publicized in late 2017 alongside the Pentagon UFO program revelations. Obtained by KLAS investigative reporter and C2C host George Knapp, the 13-page document contained some remarkable insights into what we now know were a series of sightings. One truly jaw-dropping detail about the incident contained in the report is that it also featured what appears to have been a rather massive unidentified submerged object!

If you've ever wished that you had some kind of psychic ability, you may have second thoughts about such a desire after hearing the story of the Australian psychic who claims she can smell someone's impending death. Ari Kala laments that the 'gift,' which she discovered as a teenager, isn't all it's cracked up to be. Believing that intervening in someone's impending demise could be catastrophic for them and that strangers who exude the smell probably wouldn't believe her anyway, the psychic mused that the maddening ability is largely useless.

On Thursday night's program, Loch Ness Monster researcher Roland Watson shared fascinating details on an often-overlooked aspect of the mysterious creature: sightings of Nessie on land! According to him, these encounters are few and far between, but, as one can imagine, also quite remarkable. He recounted one specific sighting from 1934 where a witness described seeing a 25-foot-long creature with flippers and a snake-like neck ambling along the beach at Loch Ness. Chillingly, Watson noted that these instances of Nessie appearing on land has led some to suspect that the beast may be behind the disappearances of sheep at nearby farms.

Meanwhile, something miraculous may be unfolding in New Mexico as a Virgin Mary statue at a church was spotted crying. Astounded parishioners noticed the strange phenomenon during a Sunday mass and, as tends to happen with such cases, word of the weird weeping quickly spread far and wide. Now hundreds of people from throughout New Mexico and nearby states have begun flocking to the church in the hopes of seeing the statue, causing workers to keep the building open around the clock in order to accommodate the masses.

While Area 51 may get all the attention of paranormal researchers and conspiracy theorists, it seems that there's another facility that may be hiding even more tantalizing secrets. Investigative reporter Linda Moulton Howe shared a lengthy report on what is known as 'Area 29' during Tuesday's program. Located within the White Sands Missile Range in New Mexico, this mysterious site was actually subjected to a remote viewing session organized by UFO researchers and the findings were remarkable. According to Howe's report, the remote viewer concluded that the facility housed exotic space vehicles and that "experimental energy research" was taking place there.